Michigan vs. Minnesota Report Says Little About What Policies To Pursue 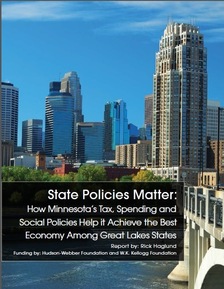 The title page of the report.

But it represents a classic case of mistaking correlation for causation — while making little effort to prove the case.

"It's clear that if Michigan is to regain the prosperity it enjoyed decades ago when the auto industry here reigned supreme, the state must aspire to be more like Minnesota than Indiana," the report says.

But the report doesn't prove this thesis. The analysis lacks evidence that differences in taxes and spending led to economic growth. Moreover, some of the facts cited are misleading.

The crux of the argument is that higher taxes and more spending equals a better economy, comparing just the two states on a few factors. But a look across the nation shows that the states with the highest taxes are those that have been stagnating the most in job and income growth. In recent decades, states like Texas, Utah and North Dakota are far outperforming states like New York, Connecticut and Rhode Island.

And even the specific factors cited do not do much to prove the point.

On K-12 education spending, the report says Minnesota spends $2,067 per resident vs. $1,447 in Michigan, implying that the former is a much higher spending state. But per capita doesn't tell you much. The important thing is how much schools actually receive. According to the U.S. Census Bureau, the average school district in Minnesota receives $13,163 per pupil vs. $12,433 in Michigan. But that only accounts for the most recent year. Going back for the past few decades, Michigan has spent more per pupil than Minnesota in every single year with the former spending about 10 percent more in 1990.

Adjusted for income, Michigan spends among the most in the country on K-12 education, ranking 9th, which is 20 spots ahead of Minnesota. And a look at where the money is going shows another stark difference. According to the National Center on Education Statistics, Michigan teachers have an average salary of $61,560 compared to $56,268 in Minnesota.

The report also compares early childhood education spending. It cites per capita spending between the states, which is almost identical. But this is simply another correlation. The states that have the most 4-year-olds in preschool are primarily in the South, but there's little evidence that this has in itself led to better education and economic achievement.

The same is true of higher education spending. The Michigan Future report notes that Minnesota spends $242 per capita vs. $172 in Michigan. While the report says that Minnesota is ranked 10th for the percent of the population with a bachelor's degree or above, this is not likely due to Minnesota's generosity to its state universities. A look at what states spend across the nation shows there is no correlation between higher education spending and more graduates. For example, Mississippi spends $313 per capita but has far fewer people with a bachelor’s degree or above.

The report is also confusing regarding how it is measuring economic progress and policy changes that it regards as bad. It critiques Michigan's business tax cut, eliminating a pension tax loophole, lowering of EITC payments, and decline in higher education spending and municipal revenue sharing in 2011. But since then, the states are pretty similar regarding job growth and the lowering of their unemployment rates, with both states down about one-third (11 percent to 7.4 percent for Michigan and 6.8 percent to 4.7 percent for Minnesota).

This isn't to say that those policies necessarily caused that outcome in Michigan, but it doesn't make sense to criticize recent policy changes for the economic climate over the past few decades.

Besides these factual issues, readers should be skeptical about relying on the tax and spending analysis for failing to cite its sources. It is easy to provide a link to sources, but the report is lacking in this regard. Considering that the spending trends can look different when they're adopted from the National Association of State Business Officers or the Census Bureau or from state budgets and reports themselves, readers ought to be told which sources are used to make the assertion in the report.

In an email, Haglund said he would likely provide a more detailed list of sources if he did future reports.

These issues aside, the report does not show that Minnesota's policies account for its higher per capita personal incomes. The report simply lists some of the tax and spending differences between Michigan and Minnesota. It does not attempt to show that the states that adopt these policies tend to perform better or gain in average income.

While it is clear Minnesota was selected to compare to Michigan because it has been doing fairly well economically in the past few decades, here is why the actual report is not useful.

There is another Great Lakes state that dramatically increased its state income tax (67 percent) and business tax (46 percent) in recent years. It spends much more on K-12 education ($14,074 per pupil), is equal to Minnesota in higher education spending ($249 per capita), has far more kids in preschool, is not a right-to-work state and is generally rated to have among the highest taxes and most regulations in the nation.

That state is Illinois. But "The Land of Lincoln" is no paradise — its GDP and job growth is well below the national average; it is 49th in net migration; and the state's fiscal situation is the worst in the country. But using Illinois in the comparison would reach the opposite conclusion than using Minnesota.

Whether there are policies about Minnesota that should be emulated is an important question. This report, however, makes questionable, unfounded comparisons and implies that Minnesota's policies caused its relatively higher per capita personal income and lower unemployment. That’s why the Michigan Future report does not help people understand what policies should actually be pursued.