Appendix B: The Model

The high degree of interstate variability with regard to right-to-work and the presence of changes within individual states would point towards an ideal natural experiment with which to test the effect of right-to-work laws on employment earnings and population.

Unfortunately, as discussed above, there is little expectation that right-to-work laws devolve upon states in a random fashion. Moreover, it is not clear that right-to-work laws are uncorrelated with other policies which might lead to firm relocation or alter the wage structure of employees. Using a blunt right-to-work dummy variable might capture effects generated by other, concomitant variables.

For example, we might observe that a possible policy variable, such as the effective business tax rate, would be highly correlated with right-to-work laws. Data on these variables is available only after the period of interest. Its exclusion would limit the analysis and introduce omitted variable bias. Its inclusion may lead to concomitant variable problems, and so a resolution must be attempted.

Indeed, we observe that the tax share from the national income accounts, measured in five-year increments from 1957 through the present, offers mixed evidence as to cointegration with right-to-work. An augmented Dickey-Fuller test fails to reject evidence of cointegration across the sampled lower 48 states, while cross-sectional specific Philip-Perron tests find a handful of states where cointegration may be rejected.[12] This argues for an econometric treatment of the problem.

As for endogeneity, we observe that places which were relatively poor in the middle of the 20th century also possessed a latent anti-union sentiment which may have led to early passage of right-to-work laws. The ensuing half century has seen many of these places grow faster than the nation as a whole, for reasons as diverse as expanded political freedom for minority groups to the widespread adoption of air conditioning. Consequentially, a model which treats the introduction of right-to-work laws as a random event would bias any estimate of its impact.

For that reason, we must suspect endogeneity within the right-to-work laws and topline measures of economic performance such as population, personal income and employment growth. To do so, we employ an identification strategy for the adoption of a right-to-work law, with an eye towards isolating right-to-work and other unobserved variables which may affect our economic variables of interest.

Here we posit that the adoption of a right-to-work law would be influenced by the importance of manufacturing within a state at the time the 1947 Taft-Hartley Act was passed and the political environment surrounding unions at that time. To represent these variables we use manufacturing income in 1947 and a binary variable representing the old southern states (those states which seceded from the union in 1860 or 1861). The latter of these has been used as independent variables in earlier unionization studies. The identifying equation for right-to-work is:

where . The resulting estimate  is conditioned on two variables which do not vary with time. This equation offers two consequences regarding the endogeneity and concomitant policy concerns above. We believe the endogeneity concern is addressed through the identification of factors which would contribute to a decision to adopt right-to-work laws in states. The time invariant nature of the regressors in this first stage estimate introduces a first stage fixed effects estimate to  in a technique introduced by Fernandez-Val and Vella.[13]

This approach captures any time invariant heterogeneity from which concomitant policy variables would have their greatest source. To correct for time varying heterogeneity (unequal variances), we employ a feasible generalized least squares estimate (FGLS) since each of the sub-estimates are on short periods which potentially suffer from small, sample-related problems as well as period-specific heterogeneity.[*] These two steps provide a safeguard against the incidental variable concern.

For our estimation we examine the conterminous 48 states and the District of Columbia from 1947 through 2011. We construct a very basic treatment model from which to estimate impacts of right-to-work laws.

where the dependent variable Y comprises one of our three measures of growth in aggregate economic activity (population, personal income or total employment in state i, in year t. These are estimated as a function of a common intercept (a presence variable for right-to-work laws, right-to-work, in state i, in year t, and the weighted average of that variable in contiguous states, weighted with a first order contiguity matrix which is:

This is designed to account for cross-border effects of right-to-work laws in adjacent states. These two elements are corrected with the expected value of right-to-work from equation (1) above, which is designed to identify the adoption of a right-to-work law. The regression includes a first order spatial contiguity element to correct for spatial autocorrelation (, a temporal autoregressive element ( with optimal lag lengths selected through an informational criterion.[†] We include an error term, All variables employed in the analysis pass individual and common unit root tests and so are assumed stationary. The inclusion of the spatial elements for both autocorrelation and the adjacent effects of right to work legislation is a feature of the Spatial Durbin Model.[‡]

There are some econometric considerations in the estimation process. The FGLS are estimated with White’s heteroskedasticity invariate, variance-covariance matrix.[14] The estimate of  does not appear to suffer from weak instrumentation concerns, with an F-statistic of 514.16, and both instrumental variables enjoying statistical significance far better than 0.01 percent.

[†] This is recommended by Hamparsum Bozdogan, "Akaike's Information Criterion and Recent Developments in Information Complexity," Journal of Mathematical Psychology 44, no. 1 (2000): 62-91. 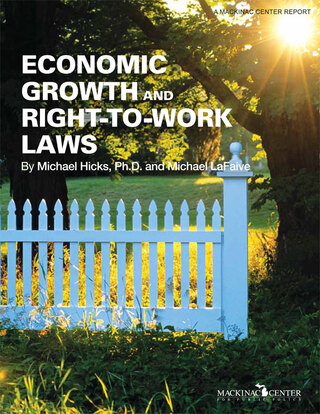