Michigan Radio recently criticized charter public schools for marketing to prospective families. The article suggested that some charter schools concentrate on appealing to parents by offering a high-quality learning program, while others simply use marketing to bring parents in the door.

Journalist Dustin Dwyer noted that some schools provide gift cards to parents who enroll their students. The marketing war among schools, as Michigan Radio put it, " ...is one of the weaknesses in Michigan’s wide-open policy on charter schools."

The landscape of school marketing is much more varied than this portrayal. Marketing can complement a quality school program. For example, I recently attended "Parent Involvement Day" at Highland Park Renaissance Academy, a charter public school near Detroit. Held close to the end of the school year, the day was a celebration of parents who had volunteered at the school and an attempt to encourage other parents to be more involved with the school in the future.

Many gift cards were given out. But these perks weren't a gimmick used to get parents to enroll their child again next year; they were used to encourage parents to play an active role in their child's education. 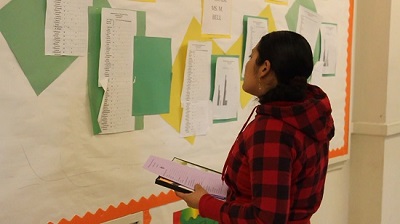 In a raffle for gas cards, parents received an entry for each parent meeting that they had attended. Prizes were also given out for participating in a scavenger hunt where parents had to look through posted information about student test scores, as well as science projects in order to find items. 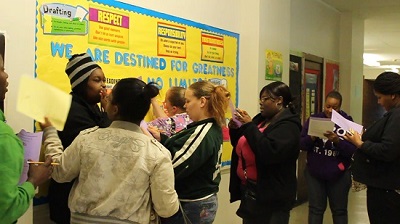 This example from Highland Park illustrates how marketing can go hand-in-hand with providing a quality educational experience to students and parents. But charter schools aren't alone in advertising to students and their families: Conventional schools do it too. Milan just announced a marketing campaign to advertise its district to nonresident students. Clintondale Schools advertises itself with the slogan: "We have a seat waiting for you!"

The Detroit Public Schools system has an aggressive "I'm in" campaign, complete with a theme song. Students who showed up to DPS on count day were given free sneakers. The district recently held "Open Doors Day," which gave parents the opportunity to tour schools and meet with principals.

A private school uses its former high school quarterback in an advertisement. Brighton Area Schools advertises itself as "the obvious choice." If you listen to popular radio stations, you've probably heard different conventional and charter schools pitching their relative merits.

This isn't a troubling development, it's a positive change. Districts and charter schools now have to explain why their school is the best place for parents' children. Some charter schools — and conventional districts — might advertise features that have little do with educational quality. But gift cards and billboards advertising former high school quarterbacks are better than the conventional district model, where the school a child attends is determined by where he or she lives.

The Michigan Radio piece implies that some parents are choosing charter schools solely based on a few handouts. The implication that parents would choose a shoddy education for their child for a $25 gift card is insulting.

The fact is, when a parent chooses a school for his or her child there are other factors at play besides school quality and marketing materials. Some parents look for schools known for providing a safe environment. Others might look for schools that are closer to their commute. After-school programming, online courses, the availability of Advanced Placement classes and other school characteristics are all factors that impact a parent's decision.

The broader question posed by the Michigan Radio piece is whether a child's parent will make a good decision when it comes to enrolling his or her child in school. It's true that a small number of parents might take that decision lightly. However, the vast majority of parents are the first and best advocates for their children, and parents should be trusted to make the best educational decision for them.