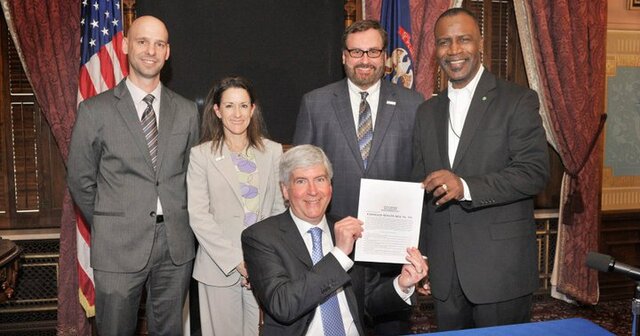 Gov. Rick Snyder and officials after signing the bill to expand the 21st Century Jobs Fund in 2011.

Despite repeated failures, the Michigan Legislature is pushing ahead with extending, and in some ways expanding, a government program that hands out select tax breaks, subsidies and loans to particular firms and special interests.

The “21st Century Jobs Fund” law enacted in 2005 created a smorgasbord of selective business subsidy-granting techniques targeted at different types of economic activities and actors. Reviews of this and other state “economic development” programs show that they consistently fall short on jobs projections, lack sufficient documentation for auditors, and spend tens of millions of state dollars with little or no return for taxpayers.

Capitol Confidential did a series of articles on the program last summer. The results are summarized below – all programs fall under the 21st Century Jobs Fund or a directly related area:

Since the 21st Century Jobs Fund was created in 2005, large bipartisan majorities of the legislature have steadily expanded its scope. Despite the program’s failures, a series of recent Senate bills perpetuating the program and revising its subsidy-granting decision-making apparatus have been introduced and appear to be on a fast track. They include the following, with descriptions provided by MichiganVotes.org:

The Mackinac Center’s Director of Fiscal Policy Michael LaFaive has co-authored several studies examining the results of various state corporate activities over the years. He told Capitol Confidential: “Government ‘economic development’ programs are intended to boost the economy by letting a small group of supposedly ‘far-sighted’ experts, bureaucrats or politicians give discriminatory subsidies to particular firms or industries. History has demonstrated repeatedly that whether rule-based or discretionary, the concept misallocates scarce human and financial capital, creates unfairness, generates abuses like crony capitalism, and doesn’t grow the economy. Given that record, these bills are the equivalent of re-arranging the deck chairs on the Titanic while leaving the throttle set at ‘full speed ahead.’ ”

Senators Kowall and Emmons did not respond to a request for comment.

(Editor's note: Every Saturday, Michigan Capitol Confidential brings you a story about a bill being discussed in committee or presented in the Legislature for a vote. For more information, go to www.MichiganVotes.org.)