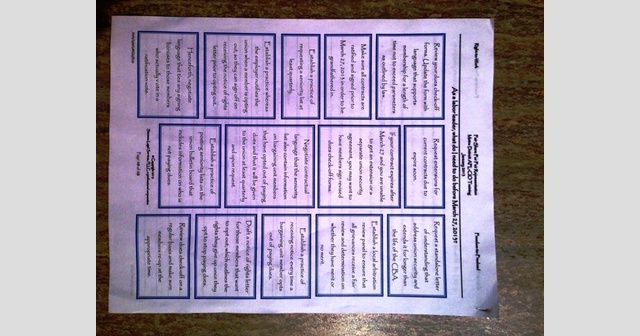 A memo from the AFL-CIO urges unions to post lists of workers who exercise their right and leave the union.

Commentary: A Milestone for Michigan — Worker Freedom in the 'Big Labor' State

March 28, 2013 is a day that will be marked in Michigan history. Worker freedom officially takes effect today.

Soon, most workers in Michigan will have the choice of whether they want to financially support their union or not. Right-to-work simply means that a union no longer can get a worker fired for not paying them.

Despite claims by unions, collective bargaining largely will remain the same. Unions still can negotiate with employers over wages, hours, working conditions and almost anything except for the requirement that workers pay them simply to keep their jobs.

Now unions need to prove their worth to their members to justify someone paying for the union's services. In the end this will make unions stronger and give better representation to workers.

However, several unions worried about losing their forced dues monopoly, have tried to delay or avoid the right-to-work law.

Some unions took advantage of the three months from when Gov. Rick Snyder signed the law and today, when it takes effect. Because the new law applies only to contracts entered into, modified, or extended after March 28, older contracts could still keep workers paying forced dues for their duration.

According to an article in the Detroit Free Press at least 41 schools and five colleges have extended their contracts to delay right-to-work. Washtenaw County even passed a resolution in February instructing county administrators to extend contracts to delay implementation of the law.

In the private sector, Kroger prematurely extended the contract with its union to keep  employees paying dues for another four years.

In addition to contract extensions, unions are devising other strategies to keep collecting dues from members who do not want to support the union. Michigan Education Association President Steve Cook has said his union will use "any legal means at our disposal" to keep members paying every cent he thinks they owe to his union.

Worse, a Metro Detroit AFL-CIO Training Memo obtained by Michigan Capitol Confidential advises "posting seniority lists on the union bulletin board that includes information on who is not paying dues" to try to shame workers into not exercising their rights.

Unions won't stop at delay tactics, they'll also almost certainly try to repeal the right-to-work law. Worker freedom opponents are expected to challenge the bill on the ballot next November.

While Michigan's conversation about right-to-work is not over, advocates of worker freedom can take today to savor joining the ranks of other states that see higher job growth, lower unemployment, higher population growth and when cost of living is factored in, workers making more than their non-right-to-work counterparts.

More than economics, right-to-work is about freedom.

"Michigan workers are now free to choose whether or not their union provides sufficient value to take their hard-earned money out of their pockets," said State Senator Patrick Colbeck, R-Canton Township.

However by enacting worker freedom, Michigan is sending a clear signal that it is putting job creators and workers above the special interests.

In the Grand Rapids Press, State Sen. Arlan Meekhof, R-West Olive, majority floor leader and sponsor of the Senate version of the right-to-work law wrote: "Workers across Michigan can celebrate their new freedom and the right to control their own future — today, the message to the nation and world from the Great Lake State is clear: Michigan is 'Open for Business.' "