When adjusted for cost-of-living

A constant claim by opponents of right-to-work, whether it be from the AFL-CIO, state Democratic legislators or the president, is that income is lower in right-to-work states. But these naysayers are blinded to a paycheck reality: the cost of living.

Having a larger paycheck doesn’t matter much if you can’t purchase as much with it. Adjusting for per-capita personal income — a standard measure of a state’s wealth — the difference between right-to-work and non-right-to-work states disappears.

Consider Connecticut, the state with the highest per-capita personal income. A dollar just doesn’t buy as much in Connecticut as it does in Michigan.

To highlight how disparate the cost-of-living can be, I had a friend explore a megastore outside of Hartford to look at prices for some common consumer goods. I had another friend scan prices on the same goods in Ann Arbor, a city roughly the same size as Hartford. In every single instance, the price of goods was more expensive in Connecticut. 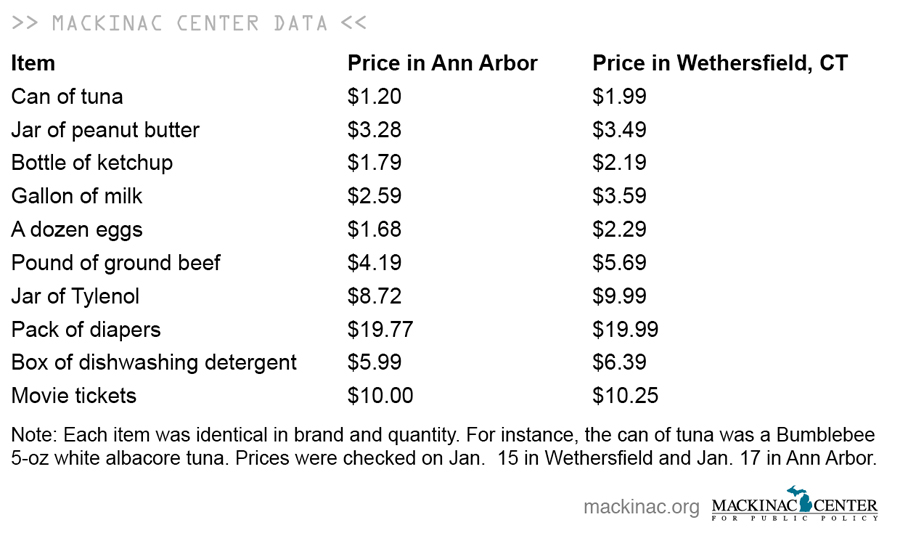 A look at state average prices for other items shows a similar result. According to GasBuddy.com, on Jan. 18, 2013, a gallon of gas costs $3.658 in Connecticut and $3.306 in Michigan. (Connecticut’s price includes a 6.125 cent higher excise tax than Michigan’s price.)

In other words, a dollar gets you more in Michigan.

In fact, when adjusting for the cost-of-living, people in right-to-work states have higher incomes than in non-right-to-work states. To calculate this adjusted per-capita personal income, I used a state-by-state cost of living index available from political scientists Dr. William Berry, Dr. Richard Fording and Dr. Russell Hanson. Their index values adjust for cost-of-living in every state from 1960 to 2007.

Adjusting to cost-of-living also changes the lists of states with the highest and lowest incomes. Natural-resources rich Wyoming becomes the second-wealthiest state and Virginia, Florida and Texas make it to the top 10. Of the 22 right-to-work states that existed in 2007, only three were in the the bottom 15 — Mississippi, Utah and Idaho.

The bigger bang-for-your-buck makes all the difference in real consumer choices. 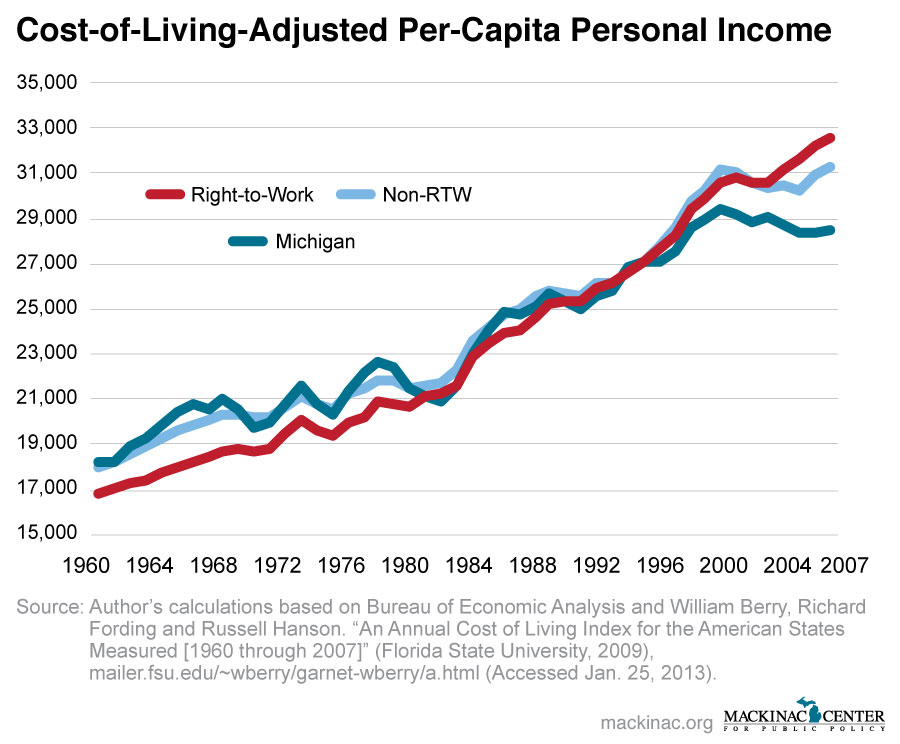 Those high-income states tend to be the states that shed the most people. New York, Illinois, New Jersey and Connecticut top the list. One explanation may be that, like the high-paying union jobs in Michigan, the state may have some good work — if you can get it. Workers tend to find opportunity elsewhere.

Right-to-work states have been gaining people and gaining income. And when adjusting for cost-of-living, these states also have higher incomes.