Analyst: 'It's the "bridge-to-nowhere" that you can land your Cessna on' 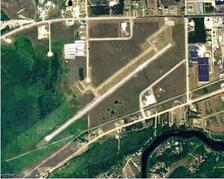 The town of Evart is home to fewer than 2,000 people — and an airport pointed to as a case study in government waste.

Evart Municipal Airport has two flights per day, one runway, zero employees and five "likes" on its Facebook page. Yet, the federal government spent $150,000 on the airport in 2012 while state and local taxpayers spent thousands more.

Patrick Hedger, a policy analyst at FreedomWorks, a grassroots, limited-government group, said he thinks the program is a waste of tax dollars.

"These ghost airports are a classic economic fallacy in yet another disguise," Hedger said. "It's the 'bridge-to-nowhere' that you could land your Cessna on."

So why is taxpayer money being spent on this project in a time of supposed tight budgets? Because of one bill from over a decade ago and government's inability to end bad programs.

There are five airports within 30 nautical miles (about 34 road miles) of the city. Evart is the only airport in Osceola County in the National Plan of Integrated Airport Systems, a group of approximately 3,400 airports nationwide that are said to be "significant to national air transportation" and funded by the federal government.

In Evart, a small town in the north central part of the state off U.S. Highway 10, this essentially means building on to the airport to justify continually receiving the funds.

According to the latest capital improvement program submitted to the state, Evart Municipal Airport has no hangars, no fueling, no aircraft based there and an issue with deer entering the runway. Over the next five years, the airport has requested $1,072,884 in federal entitlements, $93,936 in federal apportionment, $89,553 from the state, and $534,678 from the local government. The nearly $1.7 million requested is more than the $1.6 million the airport has received from those sources since 2000.

The plan calls for funding of basic maintenance; but also new lighting, wildlife fencing, hangars, fuel facilities and the equipment to connect it all. It also provides a reason to continue the funding from federal, state and local sources.

Jeff Cranson, director of communications for the Michigan Department of Transportation, said the city of Evart justified all of its projects for the program, which generally are granted to support local businesses.

"The airport's capital improvement plan reflects the city's priorities to develop and maintain the airport," Cranson said. "The projects contained within the plan are eligible under the federal program, and are funded when justified and according to overall program priorities."

An article in The Washington Post documented 88 airports around the country that attract "federal money, but few planes." These municipal airports are spread out enough to give them a "strong base in Congress" despite repeated attempts to kill the program that funds them. From The Post:

[A] bill Congress passed in 2000 created a new “entitlement” program for small airports. The rules: If a field was on the FAA’s official airports list, and if it had sufficient need for infrastructure improvements, there would be money. Up to $150,000, every year.

The money was paid out of a “trust fund” filled by taxes on airline tickets and airplane fuel.

President George W. Bush, more than once, proposed budget cuts that would have ended the program. In 2011, [Oklahoma Senator Tom] Coburn suggested making states share more of the costs. Instead, last February, Congress kept the program in place when it reauthorized the FAA.

According to The Post, Evart is the only airport in Michigan that draws this amount of federal funding with no paying customers and no planes located on site.

Zac Szakacs is the Evart city manager and he oversees the airport. He said it was originally used for businesses around the area.

"We have a 3,800 foot runway that was built to handle cargo," Szakacs said. "The original intent was speedy delivery of parts and supplies to the manufacturers. Due to economic changes, the city of Evart has been able to shift the original intentions of the EMA to include recreational use."

Szakacs said the airport has no employees, but is patrolled by law enforcement and has a terminal that is accessed by pilots through a combination lock. His capital improvement program requests, among other things, funding for T-Hangars, which he said he thinks would bring aircraft that would be based at the airport and result in a revenue stream for the facility.

Szakacs said the city will continue operating the airport as long as it receives the funding.

"If and when it becomes problematic, the city will be forced to revisit the benefits of the airport development," he said.

Hedger, however, said he hopes the program's end will come soon.

"The problem is that when the government gets into the market of infrastructure development, we begin to see tax dollars wasted on all the little projects that 'could' be built rather than those that 'need' to be built," he said.