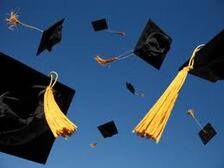 One of the main misunderstandings by those who want the state to subsidize college degrees is the assumption that this will directly lead to more wealth.

But this is an example of “the cart pulling the horse” — that is, people who graduate from college are already capable of great wealth before they actually get a degree.

The Wall Street Journal features a wonderful tribute about economist Armen Alchian, who passed away on Tuesday. The whole piece is good, but an excerpt about Alchian’s 1968 paper, “The Economic and Social Impact of Free Tuition” is relevant to the discussion here in Michigan about how and whether or not to subsidize higher education.

Alchian pointed out that government aid to higher education is a transfer to the relatively rich. That's because people who can make it through college, even though they may have a low current income, have a high wealth.

He compared subsidizing college to subsidizing drilling expenses for someone sitting on a large pool of oil. The untapped student's potential is the analogue of the untapped oil. Alchian argued that lack of current income might be a justification for loans to aspiring college students but not for outright subsidies. He cinched the argument with the following story:

One poor, "uneducated" resident of Watts, upon hearing Ralph Bunche [a well-known black educator and diplomat] say that he could not have had a college education unless tuition were free, opined, "Perhaps it's time to repay out of his higher income for that privilege granted him by taxes on us Negroes who never went to college."

Consider that only 33 percent of Michigan students graduate from a 4-year public university on time — and only 61 percent within six years. This rate hasn’t changed significantly in the past decade while federal aid for college tripled, from $10 billion in 2000 to $30 billion in 2008.

So taxpayer subsidies for higher education primarily benefit the people who either have the background or skills required to complete a university degree.

Because of this, direct subsidies to colleges — or indirect appropriations to wealthy universities — are a good example of the “poor” subsidizing the “rich.”