Measuring the Value of Charter Schools 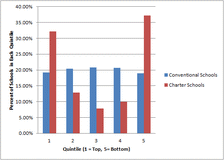 Just a few weeks ago, Bridge Magazine released a statewide ranking of schools, which took student socioeconomic background into account. Bridge's methodology is almost identical to that used in the Mackinac Center's High School Report Card.

Not surprisingly, the results were similar: Both Bridge and the Mackinac Center identified Star International Academy as the highest-ranked school.

On the heels of Bridge's release, Jeff Padden wrote in a column for Bridge Magazine that charter public schools are twice as likely to be low-scoring than conventional public schools.

Looking at student achievement at the district level will mask the fact that a district can contain both high-achieving and low-achieving schools. When those various school scores are averaged, many districts will appear mediocre. Charter public schools, without a similar "averaging out," will appear to have widely varying scores.

Consider Detroit Public Schools. The district has many low-scoring schools, but not all DPS schools score poorly. DPS' Renaissance High School received a score of 115.7 on the Mackinac Center's report card, meaning the school received an 'A'. The lowest-scoring DPS high school received a 70.8, and a letter grade of 'F.'

However, as a whole, DPS would have received an average score of 84.3. This score is still low, but just looking at DPS' district-level score would ignore its high-achieving and very low-achieving schools.

A better approach would be to compare schools to schools, instead of schools to districts.

Quintile analysis for high schools ranked using the Mackinac Center's report card are shown in the chart above. Approximately 32 percent of charter public schools ranked by the Mackinac Center were in the top quintile of schools, and approximately 37 percent were in the bottom quintile. Conventional schools followed the expected pattern, with close to 20 percent of conventional schools in each quintile. Comparing schools to schools appears to offset much of the imbalance Padden identified.

Of course, this is quibbling over a single chart. Both Bridge's and the Mackinac Center's analysis pale in comparison to the rigorous study of Michigan charter schools just published by Stanford University. In our ranking of schools, we control simply for whether a student is eligible for free or reduced-price lunch. The Stanford University study matched individual public charter school students to their conventional school peers, which included matching race, gender, socioeconomic status, English proficiency, special education status and grade level.

Moreover, more Michigan students now than ever are choosing to attend public charter schools. These students may choose charter schools because of their academic performance, or because of factors not measured by Bridge, the Mackinac Center, or Stanford, such as safety or course offerings.

Policymakers should continue to enable students to have more choices when it comes to their education. The most rigorous study of Michigan charter public schools shows that they have a significant, positive academic impact. While researchers can guess at the distribution of school quality, parents see it firsthand. And, more of them are choosing charter public schools.