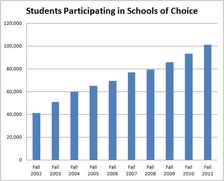 The number of students participating in Schools of Choice has increased by nearly 150 percent since the 2002-03 school year.

According to polling data and "conversations" held by the Center for Michigan, the general public is less interested in expanding school choice than it is in other policy options.

More than 50 percent of poll respondents said that increasing school choice in Michigan was important, but other options, such as providing "stronger support for educators" or improving "teacher preparation" were more popular.

Yet, student and parent actions tell a different story. More students are taking advantage of school choice in Michigan now than ever before. The number of students who attend a district other than the one they live in has been increasing. So has charter public school enrollment.

During the 2011-12 school year, more than 100,000 students attended a school outside of their resident school district, thanks to the state's Schools of Choice program. As the chart above shows, this number has more than doubled since fall 2002. Moreover, many other students may not be participating because several school districts are actively prohibiting nonresident students from attending their schools.

Other school districts offer cooperative nonresident programs that are not a part of Schools of Choice. As many as 40,000 more students could be using these programs. School districts in the Kent Intermediate School District, for example, offered more than 3,800 spots to students who wanted to attend a school outside of their home district.

On top of that, more than 130,000 Michigan students are attending public charter schools this year. But even that number masks the actual demand for better options.

Several students attending a conventional school district near Detroit interviewed by the Mackinac Center said they were there because the charter school they wanted to attend didn't have enough room. Indeed, the Michigan Association of Public School Academies estimates that two-thirds of public charter schools have wait lists.

More than 270,000 students excercise school choice, as nonresident students or public charter school students. This total does not include students who are homeschooled or attend private schools, two other ways students can opt out of conventional public schools that don't meet their needs.

So, while some may argue that the Center for Michigan poll shows that the general public is less interested in school choice, the fact is more students are opting for it. This interest may even increase more quickly, in the wake of a rigorous Stanford University study that found students in public charter schools learn more than their conventional public school peers.

No amount of conversations or polling will provide better information than simply looking at people's actions. And they speak strongly in favor of allowing students to have every opportunity to choose a school that best fits their needs.