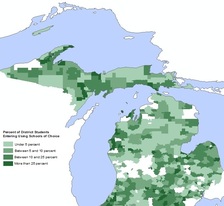 Schools of Choice participation by district, for the 2011-12 school year.

For more than 500,000 Michigan students, the school they attend is the only nearby option.

According to data posted by the Center for Educational Performance and Information, the majority of Michigan school districts have just one building that serves students of a given grade-level.

Larger districts can offer two or more elementary, middle and high schools, but many small districts cannot. For students in these districts, recent education reforms have provided at least the hope of an alternative. Some students attend charter public schools or take classes online, and, fortunately for students in rural schools, most districts accept nonresident students.

Reflecting on National School Choice Week, it’s important to remember just how far Michigan has come. Thanks to legislative reform, more educational options are available to students now than ever before. However, due to geography, family circumstances and territorial school boards, many students may not be able to access a better alternative. Just a fraction of Michigan students attend a charter public school or a school outside of their home district.

About 100,000 students are attending districts they do not live in, according to the Michigan Department of Education. As many as 40,000 additional students may be participating in nonresident choice programs administered by intermediate school districts.

Though 270,000 students may seem like a lot, as many as 80 percent of Michigan public school students attend a conventional school determined by where they live. For these students, their educational “choice” was made when their family purchased a house.

One way legislators can provide students with more educational options is to expand Schools of Choice, a policy that allows students to attend schools outside of their home district.

Though Schools of Choice has grown, there are still barriers for many students. Some school districts refuse to participate in Schools of Choice. Others have allowed just a few students to attend district alternative schools in order to receive state incentive payments.

To benefit Michigan students, school districts should be barred from discriminating against students based on their home address. Districts could set enrollment limits, as charter public schools do, and accept students through a random lottery process. State incentive programs should be changed to avoid further exploitation.

State funding should follow students more fluidly. A team working to update the way the state funds schools is grappling with this issue. Creating a mechanism to allow education dollars to follow students, even if they change schools after count day, or attend multiple schools, would reward school districts for taking in nonresident students searching for a better option.

Recent education reform has laid the groundwork for a public education system that allows a wide variety of choice. The remaining work to be done is to open that system to all students.

[i] NCES codes were used to identify “special” or “alternative” schools, which are not counted toward a school district’s total number of buildings, for a particular grade. “Vocational” schools are included.

[ii] These statistics do not include cooperative choice programs administered by ISDs.