Unions aren't the only option if employees want protection 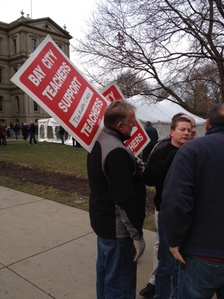 As Michigan transitions to a right-to-work state, the main benefit for teachers and others is that they will not be forced to financially support a union as a condition of employment.

Probably the biggest complaint from public school teachers about their union is the amount of money spent on politics — and where that money goes. This shouldn’t be surprising: The National Education Association, the largest teachers union in the country, took a survey of its membership a few years back and found that a strong majority classify themselves as politically “conservative.”

Yet at the same time, the Michigan Education Association endorsed 97 percent Democrats while the union pushes all sorts of left-wing social issues — from Obamacare to race-based preferences to the federal “stimulus” program.

One consideration for teachers would be to follow the educators in Roscommon and sever ties with the MEA by forming a local association. But there are other ways for teachers to get the benefits of union membership while avoiding paying money to a political group with whom they disagree.

The Association of American Educators is one of several non-union teacher association alternatives. AAE provides liability insurance, legal counsel and other resources for teachers with voluntary professional fees significantly less than what they would pay in dues to a labor union.

Here is a video of some Wisconsin teachers talking about their experience with traditional public employee unions and why they switched to AAE: