Indeed, Public Act 101 of 1988, the original emergency manager act, was geared toward preventing a court intervention like that in Ecorse. The state would review local governments to identify fiscal stress, and in extreme cases, the state might itself appoint an emergency financial manager[*] with powers similar to those granted to the receiver in Ecorse.

When Public Act 101 was passed, the ability of the state to replace local elected officials was not apparently considered a major issue. The original bill was part of a larger legislative package meant to provide assistance to Wayne County government, which was struggling to make ends meet at the time. Indeed, a report from Gongwer News Service, a Lansing insider newsletter, remarked that the “controversial part of the package” was not whether elected representatives could be displaced by the state, but instead whether to increase the state’s cigarette tax by 4 cents per pack.[17]

Public Act 101 was largely replaced in 1990 with Public Act 72, which covered school districts as well. This legislation passed with unanimous bipartisan support.[18] Gongwer News Service reported that at a committee hearing, the bill was “endorsed by both school administrators and teacher groups, who welcome new provisions to help districts deal with problems before they reach a crisis stage.”[19] 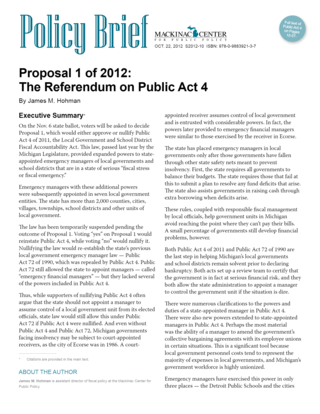