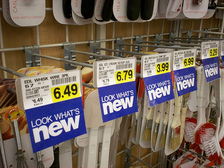 A "study" by Michigan Citizen Action, which says that it works to "advance a progressive agenda," claims the repeal of Michigan's item pricing law is a bad deal for workers and consumers.

Though the report is receiving attention from the media with little analysis, it proves nothing that it purports to show and relies on a poor understanding of economic productivity.

As a reminder, the item pricing law forced Michigan retailers to individually mark most items sold on store shelves. It also required paper tags and outlawed technological advances like electronic price labeling and modern computer systems. Michigan was the last state in the nation to have the antiquated law before it was repealed in 2011.

Amidst the anti-business rhetoric in the study — retailers are said to have "sold out" employees so the "well off" could get richer, and readers are told twice with no citation or apparent point that "corporate executives still enjoy their bonus checks." The group tracked nine grocery stores and looked at unverified figures over most of the first year after the law's repeal to try and show that abolishing the law led to higher prices for consumers and lower employee wages.

The first problem is the layout and the figures in the report. The charts jump off the page in a way that covers up words in the report. They are also unlabeled — where do the numbers come from? (See page 9 for an example). At various places, the report cites a variety of sources, including a grocers union that shows smaller enrollment, as well as the Consumer Price Index and the state Department of Technology, Management & Budget, but do not tell readers which citations apply to which figures.

Even assuming that the numbers are true, the group looks at prices in select stores, but wages and employment in retailers across the state. If those nine stores added workers, which the report does not individually measure, the extrapolation does not make sense. The numbers also show grocery store prices going higher, but then coming back down when compared to the nation.

If sinister business owners are trying to squeeze undeserved profits, why would the prices ever come down? Why not keep rising indefinitely? If you know the answer to that, you probably understand why the law’s repeal does not lead to higher prices for consumers.

The report also cites an invalid time period. The prices are measured from June 2011 to August 2012. The law did not go into effect until September 2011. To its credit, the group acknowledges this in the report, but claims that some of the stores were operating without all the price tags before September. Either way, it seems silly for them to begin measuring immediately once the bill is passed but before the law goes into effect statewide.

While the Michigan Citizen Action study uses unlinked numbers, the Michigan Retailers Association points out that since the item pricing law was eliminated, the U.S. Bureau of Labor Statistics, the state and U.S. Census numbers all show a smaller increase in Michigan grocery prices compared to the rest of the country, the first increase in grocery store employment in a decade and higher wages for employees.

• Grocery store prices from 2011 to 2012 have increased 2.5 percent in Michigan versus 3.7 percent at the national level. (Source: U.S. Bureau of Labor Statistics, Consumer Price Inflation, Food at Home category.)

• Grocery story employment is at 60,700, up from 60,600 in 2011. This isn’t much, but it is the first increase in grocery store employment in Michigan since at least 2002. (Source: Michigan Department of Technology, Management and Budget.)

• Total wages paid by Michigan food and beverage establishments, including grocery stores, increased from $361.4 million to $390.5 million from 2011 to 2012. (Source: U.S. Quarterly Census of Employment and Wages.)

Of course, there are many factors that affect food prices and employment. The Michigan Citizen Action study looks at limited, uncited data and ignores other factors, such as the Federal Reserve's multiple quantitative easing programs or the drought that the state and Midwest experienced over the summer.

The report makes one particularly big mistake — assuming that an antiquated law forcing Michigan businesses and consumers to not use new technology can work as a jobs program. This is shown when the report claims that retailers saving money on labor costs is bad for workers and consumers: "Surely, eliminating labor-driven consumer protection requirements had much to do with these savings. [This] leads to the inescapable conclusion that there are fewer dollars in working class pockets thanks to SRMA."

This demonstrates a poor understanding of economics and productivity. If government mandates like forcing grocers to have workers put a paper tag on every item creates jobs, than why does the report not recommend increasing the number of tags to 20 per item? Or 100? Would this not create even more jobs? Most people realize this would have the opposite effect.

Believing that technology and productivity is bad for our economy and leads to job losses is, unfortunately, a myth that just won’t die. But government mandates always distort the market and Michigan should not go backwards in the quest for phony job creation.