The role ISDs have played over the years in helping kids learn is not easy to discern. And while the original intent was to streamline services and reduce costs, evidence suggests that this hope has failed to materialize.

Fiscal data dating back to 1995 for school districts in Michigan are available publicly from the U.S. Department of Education’s National Center for Education Statistics. That year, ISDs received $1.03 billion in total revenue from local, state and federal sources. By 2009, the most recent year for which data are available, taxpayers supplied ISDs with $2.6 billion. After adjusting for inflation (as illustrated in the chart below), this represents a 79 percent increase. 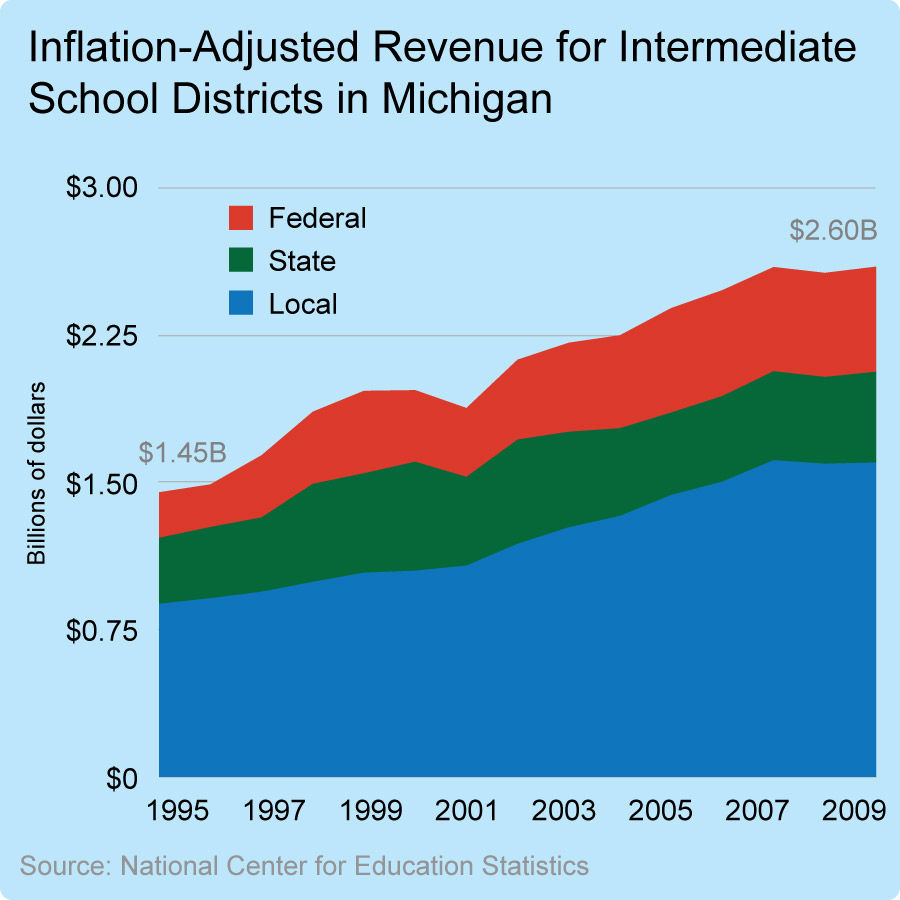 Much of a local school district’s funding is based on the number of students it enrolls, so an increase in revenue might simply be a result of enrollment growth. This is not the case with ISDs, however, and the number of students served by ISDs did not increase much from 1995 to 2009. Inflation-adjusted ISD revenue per student grew from $897 to $1,565 over this period, a 74 percent increase. 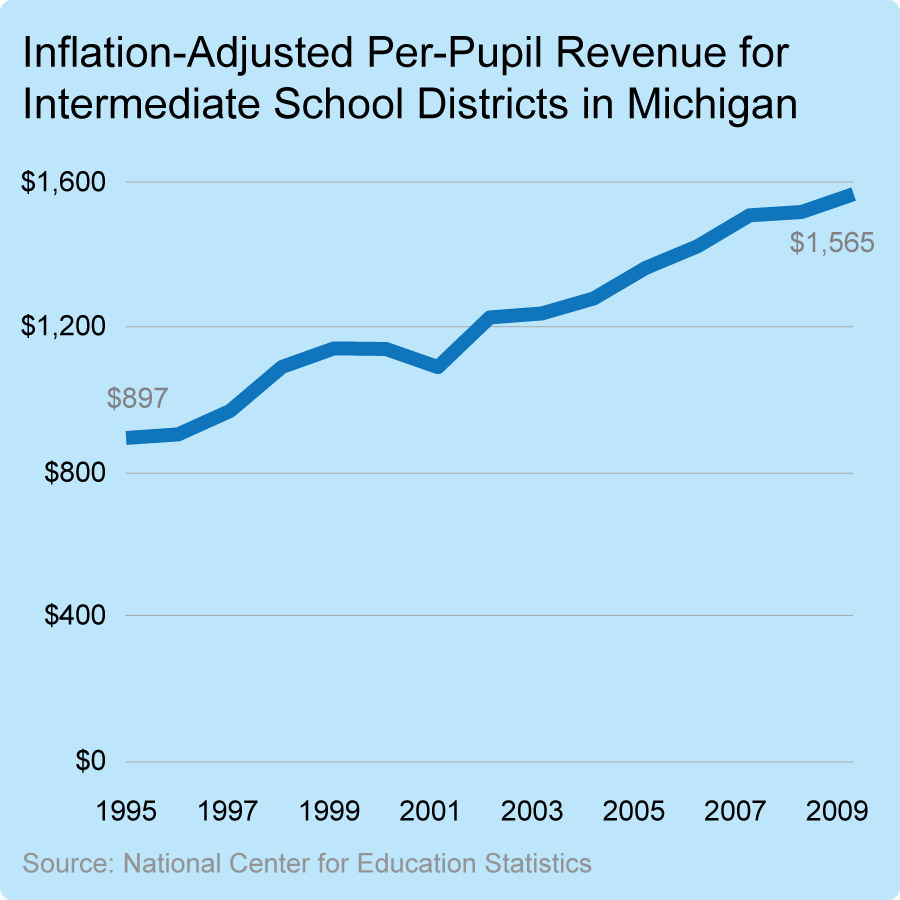 So what are ISDs doing with all of this extra revenue? It’s hard to say exactly, but the data from NCES suggest that ISDs have used much of it to perpetuate a hiring spree. The number of full-time staff on ISD payrolls grew from 9,260 in 1993 (the earliest data available) to 15,392 in 2010, a 66 percent increase. Statewide student enrollment grew by just 3 percent over this same period. There used to be one ISD staffer for every 173 students in Michigan; now there’s one for every 107 students. 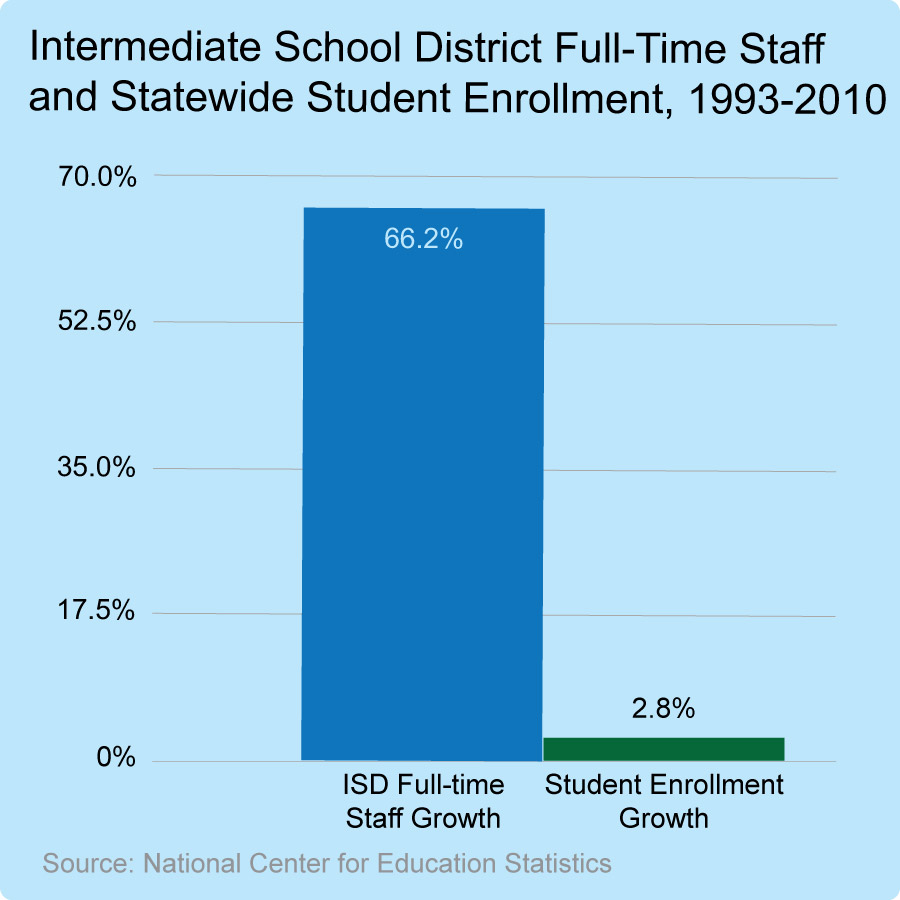 In addition to special education services, ISDs provide vocational training, transportation, financial services and professional development for school employees. Some might claim that only regional educational bureaucracies like ISDs can provide these services. That’s not the case. Nothing prevents local school districts from pooling their resources to provide similar services. In fact, advances in technology probably make it easier for districts to collaborate today than ever before.

Further, some states appear to do just fine without relying on this extra layer of educational bureaucracy. Sixteen states have no entities that resemble ISDs, and another 15 states, although they have established bureaucracies similar to ISDs, have fewer per regular school district than Michigan.

The world has changed a lot in the 50 years since ISDs were invented, and now would be a good time to reconsider their purposes and need. It may very well be the case that many of the functions that have traditionally been performed by ISDs could be done by local districts at the same or even lower cost to taxpayers. The more levels of bureaucracy Michigan’s public school system requires, the less likely resources will be directed toward what matters most — student achievement.