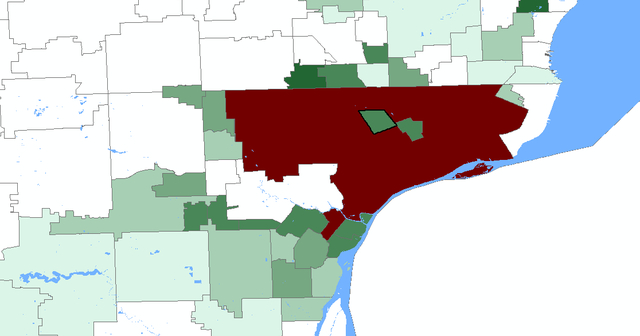 Though its students score abysmally on state reading and math tests, and though classroom management appears to be severely lacking, the Highland Park City school district still may be the best available alternative for some Detroit-area students.

State data showing what districts students are choosing to leave and where they are going reveals that many students from Detroit are choosing Highland Park.

This is not evidence that the Highland Park district is successful; in fact, a recent suit by the American Civil Liberties Union suggests that it has severe shortcomings. Unfortunately, the students from Detroit choosing Highland Park have limited choices.

If a school district elects to participate in the “schools of choice” program, students from other districts can choose to attend one of its schools (and the enrolling district receives funding on their behalf).

Highland Park offers nonresident students that option, and during the 2011-12 school year, nearly 340 of them  (representing more than a third of the district's total enrollment) chose to enroll in the Highland Park district. All but eight of those students came from Detroit Public Schools.

Districts sharing a border with the Detroit district, but not enrolling DPS students during the 2012-13 school year include Southfield, Hazel Park, Van Dyke, Grosse Pointe, and Dearborn.

For many parents, it appears that Highland Park is generally preferable to DPS. Though student choice counts indicate parental preference, they can't tell us why students are choosing Highland Park. Some may think it is a better choice academically, while others may value other characteristics, such as perceived safety.

It is disappointing that school quality in the Detroit area has deteriorated to the point where a district with just 35 percent of fourth grade students and 25 percent of seventh grade students scoring "proficient" on state reading tests looks like the most attractive available option. But this is the sad reality when many DPS schools report even lower reading proficiency rates.

Further school choice is needed for Detroit students, be it more district participation in schools-of-choice, expansion of virtual and charter schools, or education finance reform that allows state aid to more easily follow a student to the school of his or her choice.