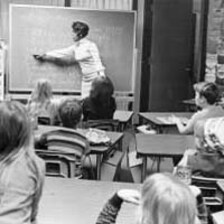 Maysue Marion, pictured in her first full-time year of teaching in 1975, has changed the lives of countless students.

Thirty-five years ago, Grand Rapids resident and high-school dropout Maysue Marion was washing windows, defrosting refrigerators, and cleaning carpets in other people's homes. A few short years later, she had a college degree and was teaching inner-city children to work hard, behave themselves, and lead good productive lives.

And today, the cleaning-woman-turned-elementary-teacher, who retired in 1996 after 30 years of service, is the proud recipient of a Grand Rapids NAACP Youth Council award for her "positive influence and inspiration that has impacted the lives of many students within our community." 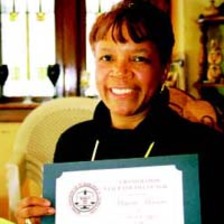 Maysue Marion proudly holds the award given by the Grand Rapids NAACP Youth Council for her 30 years of service.

Marion's teaching philosophy is simple. "Being a teacher involves much more than educating a child-they need your loving," she says. "At the end of the year when [I] saw them read, spell, and do math-it was truly amazing."

Marion's path to the classroom wasn't a straight one. In 1939, her family moved to Michigan, where Maysue and her twelve siblings were raised in a crowded Grand Rapids home. Because her mother was frequently ill or unable to care for all of her children, Maysue, the eldest, was responsible for helping to raise her younger brothers and sisters.

At age 16, Marion thought she could escape a life of poverty by dropping out of high school and marrying a Korean War veteran who was 10 years her senior.

"It was not a good situation," she recalls. "My parents had more or less arranged the marriage and I thought it was a way out."

Her husband, a heavy drinker, put Maysue and their four children through 13 years of physical and mental abuse. However, when she wasn't cleaning homes or dealing with her abusive husband, she spent her time volunteering at public Campau Park Elementary, where two of her sons attended.

Marion's knack for working with children with special learning needs was noticed by Principal John Kornelis, who encouraged her to pursue a career in teaching.

"My initial response was 'You must be joking. I didn't even finish high school,'" she remembers. "I didn't think I was capable."

Despite her reservations, Marion interviewed for, and received, a teacher's aide position in a special education classroom, and soon she knew she would never again clean a house that wasn't hers. Two years later, Marion earned her high school diploma after taking night courses and, in 1972, she graduated from Grand Rapids Junior College.

While working as an aide, Marion was encouraged to pursue a scholarship. Only 50 students out of a pool of 400 applicants received tuition assistance-and she was one of them.

"Here I was, 32-years-old, had four children, and I was headed off to college," she remembers. "God gave me that scholarship and I was determined to make the best of it."

Marion graduated from Western Michigan University in 1975 and, four years later, earned her master's degree from Michigan State University. Most of her career was spent with students in the core city of Grand Rapids where, she said, students need an extra push in the right direction.

Today, Marion still enjoys running into former students at the market or church. And it always seems that the ones who struggled the most are also the most appreciative of their former teacher.

"They come up to you in the grocery store and they hug you," says Marion. "I just love it."