For the umpteenth time: No, wages won't collapse.

If there is a challenge in defending the right-to-work concept, it isn't researching or writing, it's boredom. Union officials continue to tell the same stories. After a while the material you have to read through and rebut gets repetitive.

By undermining workers’ rights, this unfair scheme would give even more profits to greedy CEOs at the expense of our jobs, our retirement security and our kids’ future.

A recent study by the nonpartisan Economic Policy Institute found that workers in right-to-work states have a lower standard of living, make an average of $1,500 less per year and go without health insurance more frequently...A better name for this legislation would be “right to work for less.”

OK, as far as the loss of wages goes, here's the data from Oklahoma: 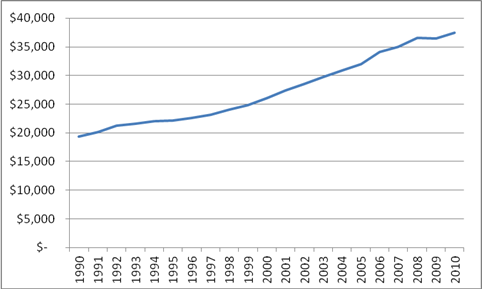 See that big drop in wages starting in 2001 when Oklahoma enacted a right-to-work law? Yeah, neither do I. Such is the terror that awaits Michigan workers when they are no longer forced to pay union dues and agencies fees in order to keep a job — steadily rising wages. Oh the humanity!

If there's one thing that Michigan has to fear from a right-to-work campaign, it's boredom due to a union establishment that cannot come up with a real threat or even an original epithet, but can be counted on to repeat the same old rhetoric, over and over and over...