Former MEA Local Prez: Union May Lose 40% of Members – Including Him – if Teacher Right to Work Passes 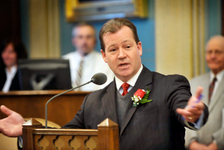 Michigan Senate Majority Leader Randy Richardville, R-Monroe, is pushing for a Right-to-Work law that would allow unionized school teachers to leave their union.

As a teacher in the Grand Ledge Public Schools and a former teachers union president, John Ellsworth says the various education reforms coming from Michigan’s Republican-led government are “despicable.” He thinks the much-talked about “right-to-teach” legislation for public school employees, which would make joining a teachers union voluntary, is part of “a continued attack” blaming teachers for school woes.

Yet, even Ellsworth says he would drop his Michigan Education Association membership if right-to-work for teachers became a reality. 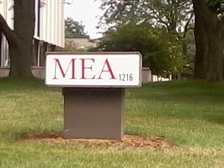 “Yes. I think I would,” Ellsworth said.

Depending upon what districts would be willing to offer to teachers who declined union representation, Ellsworth estimated that somewhere between 10 percent and 40 percent of teachers would bolt from the MEA.

The reason? He says some don’t think they are getting real value from the $90 per month in union dues he says they pay.

(Note: Recent news reports have stated that the maximum combined annual dues payments to state and national teacher union affiliates is capped at $778).

Ellsworth pointed out that many teachers are not getting “step increases” when contracts expire because of new legislation, which makes keeping the dues money look like a tempting raise.

Single salary schedules build in steps for automatic pay raises for teachers based on years of experience and earned graduate degrees or credits.

Ellsworth also noted news reports of MEA officials getting hefty raises during a period when he says many teachers are facing cut backs.

“Why not take the money and run?” Ellsworth said. “… There are a lot of people upset they are sending their money to East Lansing (MEA headquarters) and not getting a whole lot for it.”

Ellsworth said he’d be hopeful an independent teachers union would replace the MEA, which he said was “a guardian of status quo” instead of a “champion of improvement.”

Steven Malanga, a senior fellow at the Manhattan Institute who has written books on public-sector unions, said the decision to leave a union would be mostly a financial one.

“You have to think about this from the perspective of the worker,” Malanga said. “That’s  a lot of money [the dues payments]. It is an economic question. The question is going to be: ‘What return do you think you are getting for your union dollars?’”

Malanga also said that many teachers are growing more upset that the National Education Association, the parent union of the MEA, is spending their dues on issues that have little to do with education.

“There is increasing evidence that unions like the NEA are spending (dues) money on non-educational issues and some social issues that teachers disagrees with,” Malanga said. “The unions have put themselves on the defensive by arrogantly spending their members' money on things they have no business spending it on.”

Mike Antonucci is director of the Education Intelligence Agency, which researches teachers unions. He predicts the MEA could lose anywhere from 33 to 50 percent of its members if right-to-work protections for school employees is passed.

Antonucci said his estimate is based on the NEA's “market share” of eligible NEA members in right-to-work states. For example, Antonucci said in South Carolina there are 7,000 NEA members out of roughly 70,000 public education employees.

Cop Union Boss Boasts of Beating Lawmakers With Flashlights: If Soldiers Don’t Have Unions, Why Do Police and Teachers?

Commentary: Should Teachers be Treated Less Professionally than Linebackers?