Richard McLellan, a current and founding board member of the Mackinac Center, was vindicated by the U.S. Supreme Court's recent decision in Citizens United v. Federal Election Commission, which held that the First Amendment allows corporations and unions to engage in political speech through independent expenditures.

The First Amendment explicitly states that "Congress shall make no law ... abridging the freedom of speech," but from time to time, Congress has seen fit to enact a number of campaign finance laws that do just that.

Perhaps the most important of campaign speech cases was Buckley v. Valeo, decided in 1976. The Supreme Court in that case drew a distinction between direct contributions to a candidate and independent expenditures. Agreeing with Congress's concern over quid pro quo corruption (or the appearance of it), the Court upheld a limit on direct contributions to candidates and struck down a limit on the amount that could be used for independent expenditures.

Soon thereafter, in First National Bank of Boston v. Bellotti, the Supreme Court struck down a state law that sought to prohibit corporations from making independent expenditures related to a ballot initiative.

With these cases in mind, the Michigan Chamber of Commerce sought to challenge a state ban on independent corporate expenditures. The Chamber hired McLellan and developed a test case, which eventually became the 1990 case of Austin v. Michigan Chamber of Commerce. It is a testimony to the esteem in which McLellan was held that he was entrusted with arguing Austin before the U.S. Supreme Court despite not having argued so much as a traffic ticket at that point in his career.

But in Austin, in a 6-3 decision, the Supreme Court developed a new justification for limiting free speech: an anti-distortion principle. It was claimed that corporations could flood the airwaves and alter the debate.

It took 19 years, but the U.S. Supreme Court realized its error in limiting corporate expenditures in the Citizens United case. Until that ruling, the law criminally banned independent corporate expenditures for certain periods before an election. The court noted that if corporate restrictions were upheld, then Congress could ban books or newspapers published by corporations during those periods as well. Recognizing the particular importance of political speech in our democracy, the Supreme Court, while upholding disclosure and disclaimer requirements, overturned Austin and held that corporations and unions could make independent expenditures. The result was the restoration of First Amendment protections to a large segment of Americans.

McClellan was not the Mackinac Center's only tie to the case. Brad Smith, a scholar who authored one of the Center's earliest studies, was also instrumental in this free speech fight. Smith, who was a Federal Elections Commissions chairman, opened up the nonprofit Center for Competitive Politics to promote the deregulation of campaign finance. CCP filed two amicus briefs in Citizens United, and Smith signed on to another amicus brief. His academic work was cited by the Supreme Court majority opinion. 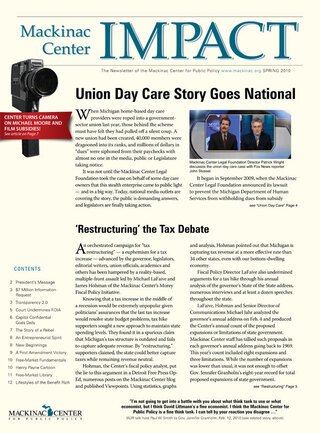