The Myth of Fossil Fuels, Alternative Fuels and Renewable Energies

Speculation about dwindling oil supplies and concern about the increasingly detrimental effects of climate change have pushed renewable energies to the forefront of U.S. energy-policy plans. As a result, the United States may derive a larger share of its energy and electricity from renewables, such as wind power, in the years ahead. However, the rise of renewables will not be as rapid as many believe, and fossil fuels and uranium[1] will continue to supply the bulk of our energy and electricity in the near term. It's worth looking at the current and projected future contributions from renewable energy sources — as well as the widespread public misconceptions about them.

[The United States] is home to significant reserves of fossil fuels. Putting aside the issue of whether domestic energy resources are currently available for extraction — and not counting the abundant natural resources available to the U.S. in the global marketplace — the Energy Information Administration's most recent statistics reveal that, as of the end of 2007, the U.S. possessed more than 21.3 billion barrels of proved oil reserves,[2] more than 237.7 trillion cubic feet of dry natural gas, and more than 9.1 billion barrels of natural gas liquids.[3] Even more abundant than our oil and natural gas reserves is our stock of coal. As of January 1, 2008, our demonstrated reserve base (DRB)[4] contained 489 billion short tons of coal. However, because of property-rights issues, land-use conflicts, and physical and environmental restrictions, the EIA estimates that only half of the DRB may be available or accessible for mining (262 billion short tons, as of January 1, 2008).[5] Finally, though not a fossil fuel, uranium — the primary fuel used to produce nuclear energy — is abundant in the United States. As of December 31, 2003,[6] given forward costs of $30, $50, and $100 per pound, U.S. uranium reserves totaled 265 million pounds, 890 million pounds, and 1,414 million pounds, respectively.[7] Should renewables not advance as rapidly as many expect or hope, the nation's fossil-fuel and uranium reserves should alleviate some concern about our overall electricity and fuel supply. 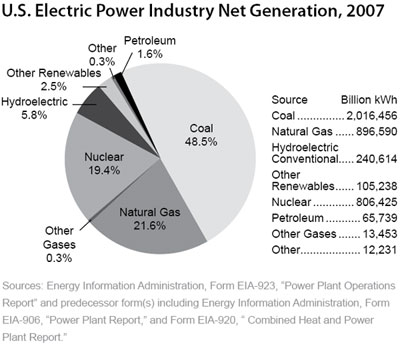 For many, however, the amount of such reserves and their collective contribution to our energy supply have no bearing on whether, or how quickly, we should transition to renewable sources of energy. Shouldn't we be moving toward renewables anyway, in order to become energy independent? Ironically, because renewables are not commercially viable technologies, the goal of energy independence is at odds with reducing our use of conventional fuels. Unless we are willing to cut our energy use drastically, cutting back on imported fuel means that our consumption of domestic fossil fuels and uranium must increase. Moreover, even if everyone agreed that we should replace such fuels with renewables, significant economic and technological barriers stand in the way of a quick and easy transition.

Almost half (49.4 percent) of [individuals polled by the Manhattan Institute] believed that renewable sources of energy — hydroelectric, geothermal, wind, solar, and biomass — are on track to replace fossil fuels in the near future. While the possibility of a rapid increase in the contribution of renewables cannot be ruled out entirely, current growth trends do not put us on a track to replace fossil fuels anytime soon.

Given renewable energies' current costs and technological limitations, as well as the limitations of an electricity grid and fuel-pipeline system designed for traditional power sources and fuels, renewables are not expected to be major players in our fuel-supply mix in the near term. The EIA projects that renewables — including hydroelectric power — will account for 14 percent of total U.S. electricity generation in 2030.[15] (Wind energy generated 0.77 percent of U.S. electricity in 2007[16] and is projected to generate 2.5 percent of U.S. electricity in 2030.)[17] This translates to an average annual growth rate of 3.2 percent, the largest increase of any fuel type.[18] The EIA says that this growth will be "fueled by the rapid expansion of non-hydro renewable generation technologies that qualify to meet State mandates for renewable energy production."[19]

An oft-repeated refrain is that renewable energies, in addition to being cleaner, are cheaper than their conventional fuel counterparts. Thus, it is not surprising that a majority (53.7 percent) of [individuals polled] indicated that it is cheaper to generate electricity from renewable fuels like wind or the sun than it is to produce electricity from fossil fuels, like coal or natural gas. However, there is a difference between the cost of renewable fuels and the cost of producing energy from such fuels. 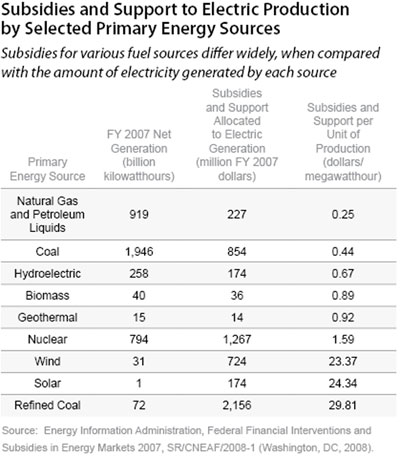 Though wind and solar rays are indeed free, wind energy and solar energy are costly, compared with the costs of conventional power generation. Several factors make renewables more expensive, including high costs of materials and skilled labor, added operations costs to electric grids that were not built for intermittent resources, and lack of adequate transmission lines to carry power from remote areas (where the wind and the sun are most plentiful) to densely populated demand centers. In addition, large federal subsidies and state renewable energy mandates shift many costs of renewable energy production from generators to electric ratepayers, disguising the true costs of these technologies.

In addition, subsidies for wind and solar energy — which together generated less than 1 percent of our nation's electricity supply in 2007 — are significantly more generous than subsidies for conventional power generation, considering the amount of electricity generated by each source.[20] In 2007, wind energy received $724 million in federal subsidies, valued at $23.37 per megawatt hour (MWh) of wind-generated electricity, while solar energy took in $174 million, at a subsidy-per-MWh value of $24.34. By contrast, coal received a subsidy of 44 cents per MWh, natural gas and petroleum liquids received 25 cents each, hydroelectric energy took in 67 cents, and nuclear power grabbed $1.59.[21] Without these generous taxpayer-funded subsidies, renewable energies would not be competitive with conventional energy sources.

Like renewable energies, hybrid cars and alternative-fuel vehicles (AFVs), including electric cars, have become more prominent in fuel-policy discussions, and they are more prevalent on U.S. roads than ever.[22] Almost two-thirds (62.7 percent) of respondents believed that such vehicles will constitute a large portion of all U.S. automobiles in ten years-but again, projections are less optimistic.

As our energy economy increasingly relies on electricity, it is important to assess whether electric cars and plug-in electric hybrids (PHEVs), which are powered completely and partially, respectively, by batteries charged by electric grids, are ultimately more environmentally friendly than hybrid cars or even vehicles that run on conventional fuels. Opinions vary. "Odds are those batteries won't be recharged with solar or wind energy," writes John Voelcker in Spectrum, the flagship publication of IEEE, formerly known as the Institute of Electrical and Electronics Engineers, Inc.[26] "In most places, grid power is for many decades going to come from the burning of fossil fuels, which generate their own emissions."[27] In other words, if coal plants supply the electric grid with the bulk of the power needed to charge electric cars, will overall greenhouse-gas (GHG) emissions increase? Voelcker writes, "The moral of the story: If you're concerned about the carbon footprint of your vehicle travel, definitely buy a plug-in — if you live in Norway, Brazil, France, or other areas with largely carbon-free electricity. Otherwise, have a look at your local grid — and think twice if you live in a place with lots of old coal-fired power plants. For you, a conventional hybrid may be kinder to the planet."[28]

On the other hand, many studies reveal that replacing conventional vehicles and hybrids with electric cars and PHEVs will lead to an overall reduction in GHG emissions. The American Council for an Energy-Efficient Economy writes that PHEVs "will reduce both their fuel consumption and their emissions of various pollutants relative to current vehicles, including non-plug-in hybrid-electric vehicles" and that "the advantage of plug-ins over hybrids is large in areas where electricity is generated with low-carbon fuels, and much more modest elsewhere."[29] Using three scenarios for the level of PHEV market penetration and three scenarios for electric-sector carbon-dioxide intensity, the Electric Power Research Institute and the National Resource Defense Council produced nine possible outcomes for PHEVs' effects on overall GHG emissions. Their study concluded that annual and cumulative GHG emissions would decline significantly under each outcome and that each region of the country would see reductions in GHG emissions.[30]

As politicians and policymakers continue to worry about climate change, foreign oil dependence, and the availability of domestic energy resources, renewable energies and alternative fuels will potentially play larger roles in meeting our country's energy needs. However, because of the high costs of renewable energies and alternative transportation fuels relative to their conventional counterparts and because of technological limitations and transmission-infrastructure inadequacies, conventional power sources and transportation fuels will remain the dominant suppliers of our nation's energy for years to come.

[4] The demonstrated reserve base is composed of coal resources that have been identified to specified levels of accuracy and may support economic mining under current technologies. See EIA, "Coal Reserves Current and Back Issues," http://www.eia.doe.gov/cneaf/coal/reserves/reserves.html.

[7] See EIA, "U.S. Uranium Reserves by Forward-Cost," June 2004, http://www.eia.doe.gov/cneaf/nuclear/page/reserves/urescost.html: "Uranium reserves that could be recovered as a by-product of phosphate and copper mining are not included in these reserves. Reserves values in forward-cost categories are cumulative; that is, the quantity at each level of forward cost includes all reserves at the lower costs."

[11] EIA, "How Much Renewable Energy Do We Use?," http://tonto.eia.doe.gov/energy_in_brief/renewable_energy.cfm.

[16] EIA, "Net Generation by Other Renewables: Total (All Sectors)," http://www.eia.doe.gov/cneaf/electricity/epm/table1_1_a.html.

[21] See EIA, "How Much Does the Federal Government Spend on Energy-Specific Subsidies and Support?," http://tonto.eia.doe.gov/energy_in_brief/energy_subsidies.cfm. Robert J. Michaels, professor of economics at California State University, Fullerton, writes, "According to the U.S. Energy Information Administration, wind's costs per kilowatt-hour hit bottom in 2002 and have since increased by 60 percent. In 2004, the levelized cost of a coal-fired kilowatt hour was 3.53 cents, compared to 4.31 cents for nuclear, 5.w47 for gas and 5.7 for wind. According to a study by Gilbert Metcalf of Tufts University for the National Bureau of Economic Research, removing subsidies to nuclear and wind power takes the former to 5.94 cents and the latter to 6.64" (Robert J. Michaels, "Hot Air and Wind," National Review Online, December 20, 2007, http://article.nationalreview.com/?q=MTlhN2I4ZDhmZTg2N2NmM2EzNmExYTEwNWRjNzU3Mzk).

[22] Hybrid cars are powered by electricity and either gasoline or diesel. Alternative-fuel vehicles include electric cars and cars that can run on natural gas or an E85 blend (85 percent ethanol / 15 percent gasoline). Hybrids are not considered AFVs, according to the Department of Energy. See EIA, "Table V1. Estimated Number of Alternative Fueled Vehicles in Use in the United States, by Fuel Type, 2003-2006," May 2008, http://www.eia.doe.gov/cneaf/alternate/page/atftables/afvtransfuel_II.html#inuse.

[26] John Voelcker, "How Green Is My Plug-In?," IEEE Spectrum, March 2009, http://spectrum.ieee.org/mar09/7928. "A non-profit organization, IEEE is the world's leading professional association for the advancement of technology" ("About IEEE," http://www.ieee.org/web/aboutus/home/ index.html). 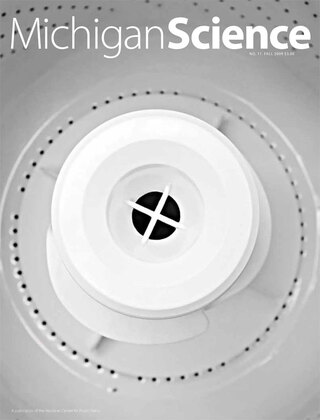