The Battle to Keep Asian Carp Out of the Great Lakes

After a long delay, the U.S. Army Corps of Engineers recently announced plans to power up a $9 million electrical barrier designed to keep Asian carp, an invasive species, out of Lake Michigan. The barrier had been scheduled for operation in late January, but plans were halted when defective cooling pipes were discovered. Now that they have been replaced, the barrier can be switched on.

The barrier, known as Barrier IIA, is located in the Chicago Sanitary and Ship Canal and created by two rows of electrodes that pass through the water and emit direct current.[1] The electrical current is calculated to repel Asian Carp if they attempt to cross from the Mississippi River, where they are presently located, into Lake Michigan. The Corps and state and federal environmental agencies hope that Barrier IIA will be a permanent solution to the threat the fish pose to the ecology of the Great Lakes.

Asian carp mainly eat zooplankton and phytoplankton, but because of the carp's size and rate of consumption, they can drive out native species of fish if food sources become limited. An Asian carp can weigh up to 100 pounds and eat up to 40 percent of its body weight daily.

The carp were first introduced to the United States in the 1970s when catfish farmers imported two species of the fish, Bighead and Silver, to remove algae and suspended matter from their ponds. During flooding in the 1990s, the carp escaped into local waterways and the Mississippi River basin. They have been migrating north ever since, and they now dominate the Illinois and Mississippi rivers.

The only thing currently preventing the carp from entering the Great Lakes is an experimental barrier that has been active since 2002. This older, smaller barrier has been operating at a power of 1 volt per inch. According to biologists, that voltage is enough to repel adult Asian carp, but not juvenile carp.

Safety questions have delayed operation of the new barrier, which can run at 4 volts per inch. Concerns remain that the barrier could spark flammable cargoes on Great Lakes vessels or kill or injure someone immersed in the ship canal.

According to an Army Corps of Engineers news release, the U.S. Coast Guard's concerns about this problem have been addressed by the Corps' decision to activate the barrier at just one-quarter strength.[2] The release also stated that as a safety feature, "[A]ll red flag barges (with flammable cargo) [are] to be escorted by Army Corps-provided bow boats as they transit the barrier area."

While this measure will certainly limit the risk involved, the Army Corps still plans to explore options with the Coast Guard and navigation industry for safely testing Barrier IIA at higher voltages. In the meantime, the Corps is advising boaters who travel through the Sanitary and Ship Canal to pass through quickly and exercise extreme caution.

Although biologists agree that the electrical barrier is the best way to combat the fish, there are other, perhaps less efficient, ways to control Asian carp. In recent years, fishing for Asian carp has become more popular. Some processing plants — such as Schafer Fisheries, interviewed by National Public Radio — are selling more than 2 million pounds annually, mostly to Asian-American communities in such areas as California, New York and Chicago.[3]

Illinois state Sen. Mike Jacobs would like to see the market for Asian carp expanded. For example, he hopes to see it on the menu in state prisons, he told NPR. The senator also said: "Some people say that smoked, it's better than salmon. But the name — carp — is likely putting non-ethnic Americans off trying the fish."

More fishing could help ensure that the non-native carp do not overcrowd the native fish of the Illinois and Mississippi rivers. Biologists say that carp are becoming a dominant fish. If Asian carp enter the food chain in the Great Lakes, they could disrupt a $4.5 billion-per-year industry based on fishing indigenous species, according to NPR.

There is still a threat that Asian carp will breach the Great Lakes barrier during a flood. Officials are continuing the search for ways to limit this threat. While the Great Lakes remain in jeopardy, Army Corps officials are working with the Coast Guard, recreational boaters, the commercial navigation industry and other groups to enhance safety in the barrier area.

For now, the Corps is trying to limit the risk to Great Lakes ecology. According to an April 7 Army Corps news release, "Both Barrier IIA and the demonstration barrier will operate at the same time to provide redundant back up." But as Mike Hoff of the U.S. Fish and Wildlife Services told Environment & Climate News,[4] "Once [Asian carp] get into Lake Michigan, there's nothing to stop them from getting into the other Great Lakes." 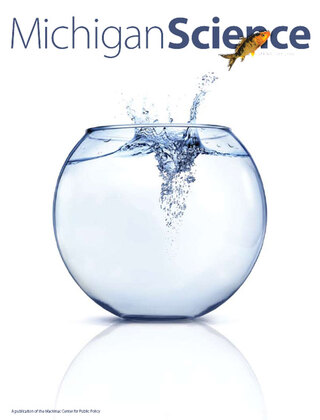