Why some companies want a higher minimum wage 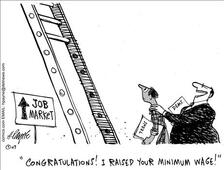 A recent USA Today article highlighted President Obama visiting a Costco store where he repeated his call for an increase in the minimum wage.

The president chose the location because the average wage for the wholesale warehouse chain is $21 per hour and reports indicate that most employees start around $17 per hour.

The CEO of Costco repeatedly has urged for a higher mandated wage floor and the reporter highlighted the difference between Costco and Wal-Mart in employee pay. Wal-Mart has an average hourly wage of $11.83 per hour.

In Michigan, the owner of Zingerman’s delicatessen in Ann Arbor has also lobbied for a higher minimum wage. Paul Saginaw pays his workers higher than the minimum and wants to force the competition to join in.

But while the heads of Costco and Zingerman's and other businesses that have joined the call (including the previous CEO of Wal-Mart) may legitimately want to improve people's lives, an increase in the minimum wage likely would help their own bottom line by harming that of their competitors.

Many, probably most, of the workers making minimum wage are at restaurants, fast food joints, and small mom-and-pop shops. Since Costco and Zingerman's have starting wages significantly above the current minimum, they will not be affected much by an increase. So the real harm will come to the stores they are competing with for business.

An increase up to $10.10 an hour (as the president has called for) or $15 an hour (as some union driven fast food protests demand) would drive up the costs for competitors. Subway may have to give up its $5 footlong deals with a minimum wage increase, making the more expensive sandwiches at Zingerman's (most cost $14, veggies and cheese extra) more attractive to consumers.

According to a study from professors Joseph Sabia of American University and Richard Burkhauser from Cornell University using reported data from the federal government, only 11.3 percent of workers who would gain from an increase in the minimum wage to $9.50 an hour live in poor households. In fact, 63.2 percent are people who live in households that are relatively well off.

The minimum wage is a poor way to help low-income wage earners and will harm them by making it less likely entry level workers will get that first job. The government should focus on policies that will increase job growth, not decrease it.