Where the Money from Higher Transportation Taxes Goes 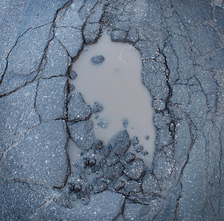 Drivers started paying those higher taxes this month, though they were enacted near the end of 2015. But at least in the short term, the main effect of these tax increases appears to be higher spending on schools and Medicaid, not road repairs.

The 7.3-cent-per-gallon tax increase motorists began paying on Jan. 1 and the 20 percent increase in the vehicle registration tax are expected to cost road users an additional $460 million this year. The money is dedicated to transportation funding — mostly to the roads, but also some for public transit.

Gov. Snyder has been pushing for more transportation funding since he took office in 2011. Many proposals were offered and rejected over the years, and the Legislature began shifting revenue from other taxes into the transportation budget.

By last year, the amount of state General Fund revenue transferred to transportation had risen to $402 million — nearly as much as the new road tax hikes will bring in this year.

With the new road tax money rolling in, all but $9.75 million worth of General Fund revenues were removed from this year’s transportation budget. The $392 million in General Fund money previously earmarked for roads is now mostly paying for Medicaid and public schools.

The budgetary change is a lesson in fungibility: Increased tax revenue can be shifted from one purpose to another. Moving some General Fund revenue to transportation allowed more road repairs in the last couple years than would have been the case without that money.

Such details rarely wind up in the talking points politicians use to sell the public a tax increase. You won’t see any press releases promoting the gas tax as a way to fund medical welfare programs, just as you didn’t see many complaints about there not being enough school funding last year because general fund revenue shifted to roads.

The gas and vehicle registration taxes will continue to fund the transportation budget. And lawmakers plan to send some of the income tax money to roads in the future, so there will be more road funding.

Still, drivers got more road funding the last few years without having to pay for it in the form of higher transportation taxes. When those taxes did go up starting this month, Lansing’s response, at least in the short term, was to spend more on schools and Medicaid. Taxpayers should pay closer attention to the lesson about fungibility as they listen to future state spending debates.