Despite a Setback, Right-to-Work is Advancing Across America 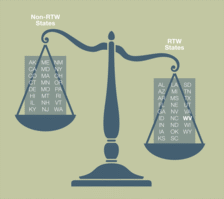 On March 29, the U.S. Supreme Court issued a one-line ruling on a case that would have brought right-to-work protections to public employees across the country. The court said that a lower court decision would stand, meaning government unions in non-right-to-work states can still get public employees fired for not paying them.

But since the decision was the result of a 4-4 tie rather than a majority ruling, it does not affect the entire country — only the western states covered by the 9th Circuit Court of Appeals, where the case was decided earlier. The case, Friedrichs v. California Teachers Association, was brought by the Center for Individual Rights on behalf of Rebecca Friedrichs and several other California teachers. Friedrichs and her fellow plaintiffs argued that everything done by a government union is “inherently political” and that they have a First Amendment right not to fund politics they disagree with.

The country is moving swiftly in the direction of worker freedom. When West Virginia became a right-to-work state, it became the fifth state to do so since 2000, and the fourth since 2012.

Supporters of worker freedom were initially optimistic that the court would affirm the First Amendment rights of public employees through Friedrichs. With the death of Justice Antonin Scalia in February, however, a positive outcome seemed unlikely as Scalia was widely thought to be the swing vote in the case. For the time being, Scalia’s passing likely saved unions’ ability to force public employees in about half the states to pay them dues or fees.

Until a ninth justice is appointed, not much of anything deemed controversial will get through the court, meaning freedom may be delayed for Friedrichs and other public employees across the country wishing to exercise their rights.

But if the Senate continues to block the nomination of Merrick Garland, President Obama’s nominee to the Supreme Court, and the president who is elected in November appoints a justice like Scalia, there is a good chance the issue of forced unionism could be reheard by a new court and decided in favor of worker freedom. On the other hand, if Garland or a similar nominee is confirmed to the court, chances are very slim for a decision favoring public employees’ First Amendment rights. As the Washington Times recently noted, “Garland rulings consistently side with labor unions.”

Still, attorneys for the plaintiffs are undaunted. Center for Individual Rights President Terry Pell released a statement after the decision, saying, “We believe this case is too significant to let a split decision stand and we will file a petition for rehearing with the Supreme Court.” Rebecca Friedrichs echoed this sentiment, telling reporters, “All of us plaintiffs have been in the classroom for a very long time, so we’re very patient people, and we are definitely in this for the long haul. Today’s decision isn’t the end of the case, and in our view, it simply just delays the final outcome.”

Cases using similar reasoning to Friedrichs, such as the Janus v. AFSCME case brought by the Liberty Justice Center in Illinois, are working their way through lower courts and could be heard by a full Supreme Court if it does not rehear Friedrichs.

No matter what happens at the Supreme Court, labor reform will continue to come from the states. When West Virginia became a right-to-work state earlier this year, it became the fifth state to do so since 2000, and the fourth since 2012. It also became the 26th right-to-work state, meaning that there is now a majority of states in the country in which unions cannot get workers fired for not paying them. That number will continue to grow.