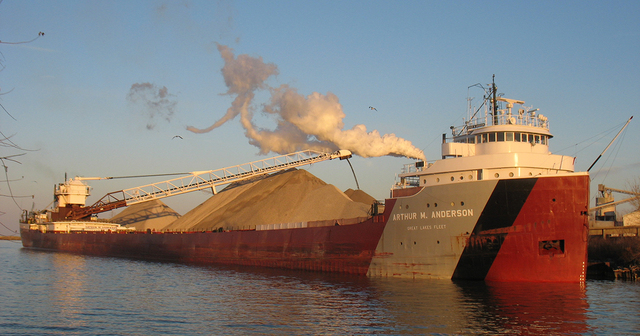 The Steel Industry, Not Taxpayers, Should Pay for New Soo Lock

Industry should pay for the services it uses

The new tariffs on imported steel imposed by the Trump administration have been roundly criticized by economists and major steel-consuming industries. The announcements last week that Nucor will build a new plant in Florida, and U.S. Steel will bring its Granite City, Illinois, plant back on line are good news for those 500 steelworkers, but may pale against the number of employees laid off by the industries that use this now more expensive steel. With these tariffs a done deal, the administration has significant leverage to move onto another item on the steel industry’s public policy wish list: the building of a second Poe Lock, part of the Soo Locks in Sault Ste. Marie that connect Lake Superior to the lower Great Lakes.

The steel industry is seeking public funding for the construction of a second Poe Lock. Roughly 50 percent of the iron ore used in American steelmaking goes through the Poe Lock, the one lock at the Soo Locks that can handle the 1,000-foot “lakers” used to haul ore across the Great Lakes. A 2015 Department of Homeland Security study found that if this lock were shut down for a period of six months or longer, unemployment would rise by 5.8 percentage points and the U.S. gross domestic product would shrink by $1.1 trillion, or roughly 6 percent.

Taxpayers shouldn’t pay for this second lock, though — its beneficiaries should and they are the steel industry and its consumers. For starters, the federal government is resource- constrained, now and forever.

Currently, the users of the Soo Locks pay none of the capital or operations and maintenance costs. Inland waterway users, on the other hand, at least pay 50 percent of the capital costs of the infrastructure they use. The same tariffs, i.e., fees, imposed on inland waterways users, should be imposed on users of the existing Poe Lock, which could then be one of the sources for financing the construction of the second Poe Lock, estimated to cost at least $700 million.

Neither the federal government nor third-party service providers currently have authority to impose user fees. Authorizing them for the Soo Locks would enable an effective infrastructure partnership. The second Poe Lock should be added to this list of eligible facilities as part of the Trump administration’s infrastructure proposal.

The rural infrastructure program can be used to fund maritime and waterway projects and the transformative project program can be used for “bold, innovative, transformative” projects. The incentive program would distribute $40 billion to the states on a formula basis, guaranteeing Michigan funds towards the project. A second Poe Lock surely should meet these definitions.

Further, the Trump infrastructure proposal calls for additional resources for Water Infrastructure and Financing Improvement Act loans, extending the program to 2028, and would authorize navigation loans. These loans could be lent to any of the Great Lakes steel states, localities or steel producers as part of a public-private partnership in order to facilitate the construction of a second Poe Lock.

In no event should taxpayers fund a second Poe Lock. The main source of funds for the construction, maintenance and operation of a second Poe Lock should come from the steel industry as it would be the primary user and beneficiary. A user-financed second Poe Lock would fit in with the goals outlined in the Trump administration’s infrastructure proposal, and especially considering it just locked down special protective treatment via a new tariff, the steel industry should bear the responsibility of funding this important infrastructure upgrade.