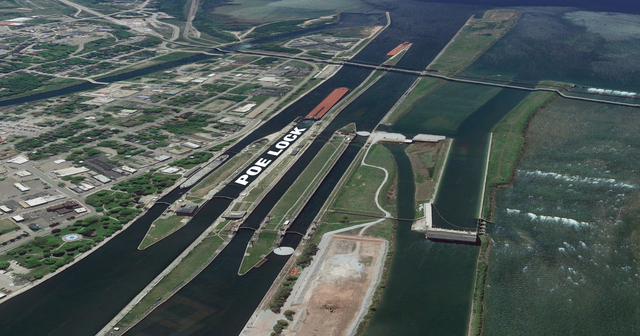 The Right Way to Fund a Second Poe Lock

The shipping industry should help pay for the services it uses

Your house is on fire. Worse, your house is located in a drought-stricken area so the fire department’s resources are oversubscribed and undersupplied. You do have a well; it just needs a source of power for the pump.

You ask yourself: Should I pay for the electricity to run the pump or wait until the fire department has replenished its water supply and let them put it out, at no direct cost to me? A rational person would opt to turn the pump on and begin to fight the fire, given the potential catastrophic consequences. And they’d be right.

This scenario is analogous to the conundrum facing members of the U.S. inland shipping industry that use the Poe Lock, one of the Soo Locks located near Sault Ste. Marie, Mich. But the industry has essentially opted to wait for the fire department.

The Poe Lock can accommodate 1,000-foot Lakers hauling up to 80,000 tons of iron ore. A 2015 Department of Homeland Security study suggests that if this lock were shutdown for a period of six months or longer, unemployment would rise by 5.8 percentage points and the U.S. gross domestic product would shrink by $1.1 trillion, or roughly 6 percent. That’s how important this lock is to the nation’s economy.

The primary beneficiaries of the Soo Locks are the shippers of the products carried in the vessels using the locks, including iron ore, steel and coal producers as well as farmers. But none of these beneficiaries pay a tax or user fee to support the locks. Instead, they’re waiting for the fire department: Relying on the federal government to continue funding the locks and even hoping Washington will pay 100 percent of the cost of a building a second Poe Lock for their use.

There is no toll for using the Soo Locks. And because the locks are not on the statutorily defined inland waterway system, there are no taxes on the fuel used by vessels traversing them. In fact, there are no user fees or taxes associated with the movement of any commodities through these locks.

Congress authorized the construction of a second Poe lock in 1986 and required some of the costs to come from a source other than the federal government. The Soo Lock navigation industry and shippers have lobbied against this cost contribution over the years, and now the current plan is to fund the construction entirely with federal funds, even though the cost of the project has ballooned from $227 million in 1986 to north of $700 million today.

If a second Poe lock is as essential to our economy as the commercial navigation industry and shippers claim, given the federal government’s lack of resources and existing $20 trillion debt, the beneficiaries should pay at least 50 percent of the costs. This is what vessels that use the inland waterway system pay. It is also time for those who benefit from all locks and dams used for navigation to pay the operating and maintenance costs of this infrastructure.

As in the analogy of a house fire, by combining your resources, including the well water with the limited public water, the fire will be doused sooner than it would otherwise be. It’s been 31 years since the second Poe Lock was authorized and the fire still rages as shippers wait for the fire department. But it should continue to rage until the direct beneficiaries of putting it out are willing to pay the price.