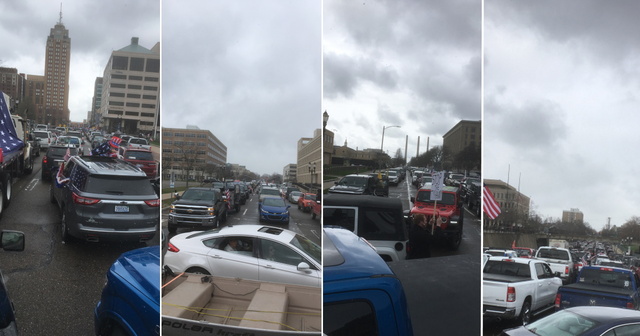 The Right to Protest Should be Protected, Even During the Pandemic

The constitutional freedoms to speech and assembly are in the news this past week. People across the country have gathered in their communities and state capitals to petition for relief from what they believe are harmful restrictions on personal and economic activity.

In Michigan, thousands of people drove to Lansing and packed the streets around the Capitol to protest Gov. Gretchen Whitmer’s latest stay-at-home orders. While a small percentage of participants did not abide by the sponsors’ requests to remain in their vehicles and follow social distancing protocols, the protest was large and peaceful by all accounts. State and municipal leaders deserve praise for their restraint in not interfering with or shutting down the protest.

Sadly, other government jurisdictions seem to have forgotten their obligations under the First Amendment. Last week, the Raleigh Police Department arrested a protestor for violating the North Carolina governor’s executive order. It later defended its action by tweeting “protesting is a non-essential activity.” With more protests across the country inspired by Michigan’s Operation Gridlock planned in the coming days, civil society organizations across the philosophical spectrum are banding together to defend our First Amendment rights.

For these reasons, the Mackinac Center has signed onto a joint statement spearheaded by the National Coalition Against Censorship “urg[ing] all public officials to recognize their obligation to defend First Amendment rights while they protect public safety.”