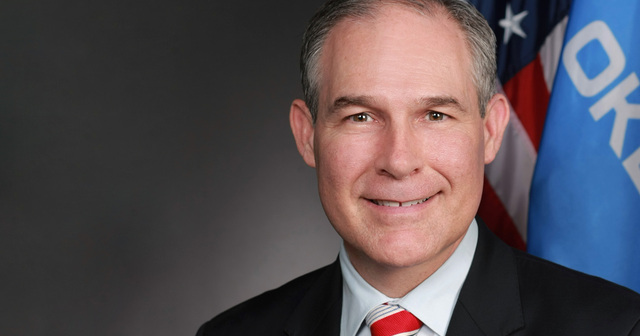 As the Senate Environment and Public Works Committee moves closer to a vote on sending President Trump’s nominee to lead the EPA to the full Senate, the battle over Scott Pruitt’s record is being reinvigorated. His Jan. 18 hearing and the responses to his written testimony were predictably combative and just as predictably hyperpartisan. Earlier today, Senate Democrats took a strong stance against Pruitt when all ten members of the Environment and Public Works committee boycotted the vote in an attempt to stall his nomination process.

Those watching Pruitt’s seven-plus hour hearing in mid-January might have hoped to see senators posing reasonable questions to a well-qualified nominee to help them assess his ability to serve as EPA administrator. What they actually saw was an increasingly divisive battle between two worldviews governing energy and environmental policy.

Those views are easily described. The first has a foundational principle of working to improve human lives and manage the natural environment using the health and wealth gained from access to affordable, reliable energy. The second is a commitment to protect the natural environment from what is believed to be the inherently damaging influence of humans. Generally, Senate Republicans and Pruitt's supporters work from the first view, while Senate Democrats and Pruitt’s detractors work from the second.

It is clear that Scott Pruitt has the legal and technical knowledge as well as the experience to competently carry out the duties of EPA administrator. Pruitt has ably served as the Oklahoma attorney general since 2010. Before that, he served as an Oklahoma state senator and as president of the Republican Attorneys General Association.

While some disagree with his actions, his track record as his state’s attorney general demonstrates an ability to accurately discriminate between matters of law and matters of policy or preference. Additionally, support from other attorneys general, elected officials, environmental groups and business leaders reveals broad, bipartisan support for his nomination.

Pruitt has outlined five key ideas to help policymakers and the average American understand where he would take the agency during his tenure.

First, he believes that “we must reject as a nation the false paradigm that if you’re pro-energy, you’re anti-environment and if you’re pro-environment, you’re anti-energy.” The past several decades make it clear that, on this measure, Pruitt is correct. The United States has a track record of producing abundant, reliable, affordable energy to power the nation while also consistently improving the quality of our air and water.

For example, from 1980 to 2015, concentrations of major air pollutants have been drastically reduced – carbon monoxide by 84 percent, lead by 99 percent, nitrogen dioxide by 60 percent, sulfur dioxide by 84 percent, and ozone by 32 percent. From 2000 to 2015, particulate matter levels were reduced by 37 percent. This happened even as per capita energy use grew by almost 2 percent from 1980-2000 and then became much more efficient, dropping by over 10 percent below 1980 levels by 2013.

Second, Pruitt noted, “We should celebrate the great progress we’ve made as a nation since the inception of the EPA and the laws that have been passed by (the Senate), but recognize that we have much work to do.” As demonstrated by Pruitt’s written answers to senatorial questions, suggestions that he would abandon environmental protection and turn a blind eye to unchecked pollution are nonsensical. In his answers, he commits to prioritizing clean up of Superfund sites and to working to meet the requirements of federal environmental law – such as the Clean Water Act, the Clean Air Act and the Safe Drinking Water Act.

Third, he argued that rule of law matters and that government regulators should not be choosing winners and losers. Instead, he said, they should “follow the law in setting up the rules so that those who are regulated can plan, allocate resources to meet the standards, versus operating in a state of uncertainty and duress.” Free markets work, and the numerous legal setbacks the EPA has experienced for overreaching its legal and constitutional bounds makes obeying the law an obvious goal for the federal agency.

Fourth, he stated that federalism matters and a partnership of state and federal governments is necessary to “achieve good outcomes as a nation for air and water quality.” Our nation and legal system are based on a principal of cooperative federalism. Pruitt’s desire to limit federal overreach into the realm of the states would serve him well in his new job.

Fifth, he affirmed the importance of public participation and said it is essential that government officials “hear all voices as we make decisions on behalf of our country with respect to environmental laws.” It seems odd that any groups would resist efforts to seek out stakeholder opinions.

In each of these areas, Pruitt has demonstrated a commitment to the idea that human well-being will be best served by the controlled use of natural resources, governed by reasonable environmental regulation and adherence to established legal principles. This is hardly the idea of a fringe radical, unless one believes the primary task of the EPA is to stop the human impact on an imaginary concept of pristine nature.

In reality, Pruitt’s nomination process should be an entirely unremarkable effort to vet a clearly capable nominee. But it has become something far more acrimonious and involved. That acrimony is much easier to understand when you realize the process is actually the front lines of a battle between two opposing worldviews.