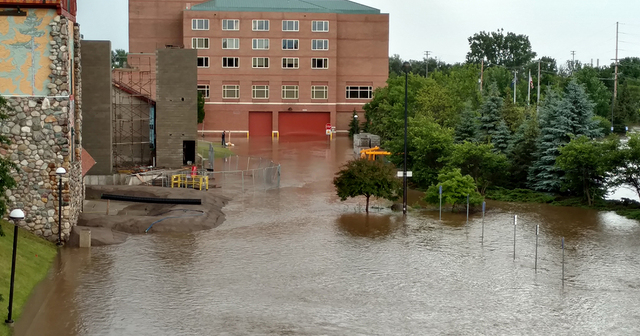 The Double Standard in Environmental Protection: A Reprise

Last week, several areas in Mid-Michigan experienced heavy rains and near-record flood conditions. As the rain fell and water levels rose, basements began to fill with water and untreated sewage from the area’s overloaded sewer systems. Throughout the streets of Mid-Michigan towns, the impacts are clear. Sewage and water damaged carpet and furniture; boxes of ruined property are piled high on city streets, waiting for sanitation crews to pick them up.

This unusual and unfortunate weather event coincided with research being carried out at the Mackinac Center. In November 2016, we had discovered what appeared to be a clear double standard in environmental protection. When private industry harmed the environment, it was (rightly) met with fines, regulatory penalties and a great deal of media attention and condemnation. When governments harmed the environment, on the other hand, their actions were met with a collective shrug of the shoulders.

For example, in 2010, when an Enbridge pipeline leaked over 1 million gallons of crude oil into the Kalamazoo River, the company faced a $177 million settlement. In 2014, the cities of Michigan released 11.56 billion gallons of untreated sewage into public waterways, including the Great Lakes. At the time, we believed the government agencies responsible for the damage faced little to no consequence for their actions.

But a deeper look at the situation uncovered a surprising — and at least partially reassuring — truth. At the enforcement level, the double standard we had highlighted earlier does not appear to exist, or, at least, should not be inferred from these types of examples. The key information comes from the history of Michigan wastewater management: how wastewater spills compare to industrial spills, and the enforcement actions taken in response.

Let’s start with the billions of gallons of raw sewage released into Michigan’s environment by government-run water systems. Contrary to what many would think, these discharges are not accidental. They are an intentional and designed response to naturally occurring phenomena.

In times of heavy rainfall, sewers fill, and if enough water enters the system, they reach their capacity and overflow. To avoid sending human waste on a roundtrip — back into our homes — sections of municipal sewer systems are actually designed to release sewage into lakes and rivers. These design features are known as outfalls.

So, this is a conscious decision on the part of sewage system planners and managers — and the public who employ them, meaning taxpayers. Faced with an either-or decision regarding potential damage from sewage overflows, we effectively choose to protect our personal property over our natural environment. But this is no small choice to make, as published research indicates that Michigan’s “recreational beaches are being adversely impacted by human fecal pollution,” leaving nine to 15 swimmers per 1,000 at risk of acquiring a viral infection each season.

Email discussions with researchers at Michigan State University also indicated that there are hundreds of disease-causing pathogens in sewage. Those pathogens can cause a variety of acute and chronic gastrointestinal and respiratory diseases. As many as 13 million cases of illness per year result from contact with infected surface water systems in the U.S.

So back to the double standard. Private industry actors clearly pay a hefty fine when they spill. But do municipalities that operate sewer systems designed to release disease-causing sewage into lakes and rivers simply go free? The short answer is no.

Michigan’s state and municipal governments have spent the last 30 years working to redesign sewer systems to help minimize the impacts of outfalls. In 1988, Michigan implemented a strict sewer overflow policy to limit the amount of sewage being diverted from houses into lakes. At the time, state employees found 80 systems, containing 613 outfalls, that had repeatedly discharged untreated wastewater. By 2015 — 27 years later — the total number of outfalls had decreased to 124. That’s a reduction of nearly 80 percent. As a result, the entire state of Michigan now releases only half as much untreated sewage as the city of Detroit did by itself in 1988.

While the state’s overflow policy did acknowledge that having zero sewage releases a year was an impossibility, state regulators still set minimum standards. When those standards are violated, some form of enforcement or remediation action is taken, regardless of whether the violation came from a municipality or a business.

Take the nearby city of South Bend, Indiana, where the wastewater facility annually dumped 600,000 pounds of euphemistically renamed “suspended solids” into the St. Joseph River. That river runs past the Michigan cities of Niles, Buchanan, Berrien Springs, St. Joseph and Benton Harbor and then into Lake Michigan. The city’s spills were above permitted levels, so South Bend was legally required to make $509.5 million worth of improvements — significantly more than Enbridge’s $177 million settlement. The authority to demand these improvements exists in the federal Clean Water Act, under which a roughly 50-50 split between actions has been taken against municipalities and private businesses.

Enbridge made the improvements and cleaned up its spill, but what happened to South Bend? The improvements scheduled under the Clean Water Act aren’t due to be completed until 2031, and South Bend’s city council reports the cost of improvements has ballooned to $861 million. So, the environment will be protected, but it will be a long, drawn-out and expensive process, and the bill must be paid by state and local taxpayers.

Every municipality in Michigan is engaged in a long-term plan, like South Bend’s, to meet federal standards for water quality. We’re doing much better, but we’re not there yet. It’s essential to recognize that the process takes time and a lot of money.