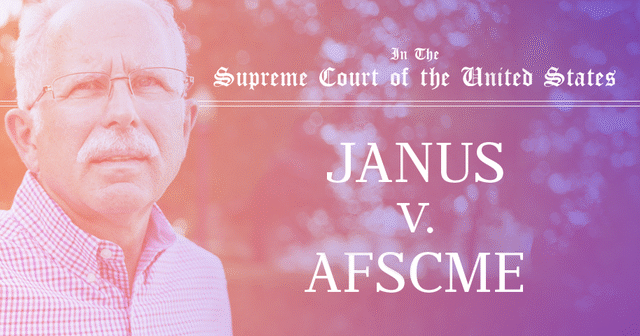 MIDLAND, Mich., June 27, 2018 /PRNewswire-USNewswire/ -- Today, the Mackinac Center for Public Policy champions the ruling by the U.S. Supreme Court that public employees will no longer be forced to pay a government union as a condition of their employment. The decision, which cited Mackinac's amicus brief, in favor of plaintiff Mark Janus restored public employees' First Amendment freedoms of speech and association, paving the way for nearly five million public employees to choose whether to continue subsidizing government union activities with their paychecks. Video commentary is available here.

"With today's ruling, government employees will no longer have to subsidize government union speech. Thomas Jefferson stood up for these very principles when defending religious freedom, and today's decision brings our country closer to achieving that Jeffersonian ideal," reacted Patrick Wright, vice president for legal affairs at the Mackinac Center for Public Policy.

In providing civil servants with the clear and affirmative decision to join or decline to join a labor union, the opinion states, "Neither an agency fee nor any other payment to the union may be deducted from a nonmember's wages … Unless employees clearly and affirmatively consent before any money is taken from them, this standard cannot be met."

For over 30 years, the Mackinac Center has been advancing worker freedom, reaching over 100,000 workers and helping them to exercise their rights after Michigan passed right-to-work in 2012. In February, the Mackinac Center launched My Pay My Say, a national education and awareness campaign to support public employees affected by the court ruling in Janus v. AFSCME.

"The Mackinac Center has been supporting the cause of worker freedom for over three decades and congratulates Mark Janus on his principles and dedication that led to today's historic decision," said Joseph Lehman, president of the Mackinac Center for Public Policy.

"My Pay My Say is committed to supporting workers. Government unions are not always transparent so workers will need access to accurate information. We provide that through our website, national call center, and legal support," said Lindsay Boyd Killen, vice president for strategic outreach and communications at the Mackinac Center for Public Policy.