Lack of payoff on investments is biggest driver of underfunding 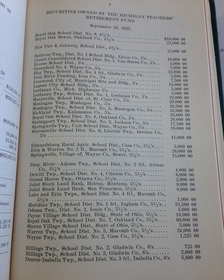 The state’s pension fund lost $10 million by investing in a private development deal in Ann Arbor. A diversified pension system ought to make room for some risky investments, but system investors have doubled down on chasing high returns.

The Michigan Department of Treasury confirmed this week the State of Michigan Retirement Systems lost about half its original $20 million investment in the failed Broadway Village project with the recent sale of the property to a new development team that is planning an entirely new project now.

About a decade ago, the SMRS, which manages pensions for hundreds of thousands of public school employees, state workers, state police and judges, made a $20 million equity investment to become a limited partner in a $172 million redevelopment project on Broadway Street, in the area of Ann Arbor known as Lower Town, north of downtown across the Huron River.

The project, officially known as Broadway Village at Lower Town, stalled soon after the developer finished demolishing the collection of shops that stood on the site, and the property, more than six acres, has sat vacant for several years now, surrounded by a chain-link fence, waiting for new investors to come along. It's been a sore point for residents who miss what used to be there.

"As the real estate market has improved, the general partner recently sold the property, resulting in a loss of approximately half the initial SMRS investment," Ron Leix, a spokesman for the treasury department, confirmed this week.

In 1997, only 6.4 percent of state investments were in real estate deals like this. It’s grown to over 10 percent today. Other high-risk investments in private equity deals have increased from 6.6 percent of total investments to 15.2 percent.

Further back in 1987, the state was partner to none of these type of investments. It was fully invested in traditional securities like stocks and bonds, with half of the book value of its investments in lower-risk, short-term investments, such as government and corporate bonds.

And just to note, when the school pension plan began 100 years ago, it invested exclusively in government bonds, mostly with local schools districts.

The increasing risk to state investments is not even including the rare times when pension funds get pledged towards political deals.

The failure to achieve the assumed investment returns has been the largest driver of the unfunded liabilities that have made government workers Michigan’s largest creditors. And as returns have been harder to come by, investment managers have shifted to riskier strategies. While this may generate higher returns, it is also likely to generate more of the losses that were seen in Ann Arbor.