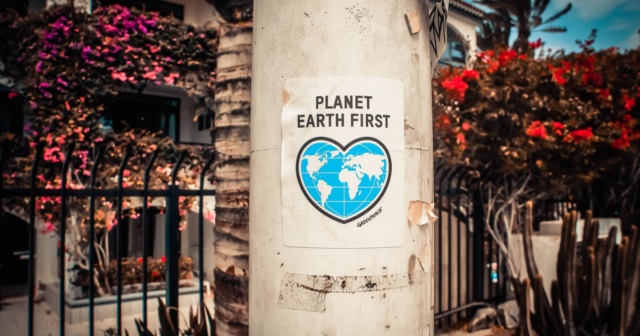 Some Greens Rejoice Over Environmental Effects of COVID-19 Restrictions

There is no “silver lining” to impaired human well-being

Quarantine measures put in place to slow the spread of the COVID-19 virus have evoked a joyous response from the more extreme elements of the Green movement as they see human influences on the natural environment diminished. Rather than promoting the well-being and safety of humans, people with these extreme views actually celebrate as they see human society being harmed. But common sense tells us that humans are a part of the natural environment and that taking pleasure in the reduction of human well-being is a self-destructive habit that we can (and should) all firmly and politely reject.

For example, on March 24, a Twitter account claiming to be members of a United Kingdom-based chapter of the environmental group Extinction Rebellion proudly posted pictures of fliers they had hung in their area proclaiming, “Corona is the cure. Humans are the disease.” The text accompanying the photos claimed that virus-related restrictions on human activity were allowing the Earth to heal and that “the air and water is clearing.” To their credit, many other XR affiliates defended the value of human life and society. They immediately practiced social (media) distancing from the post by urging their fellow members to rethink and remove their statement. The account has since been suspended. 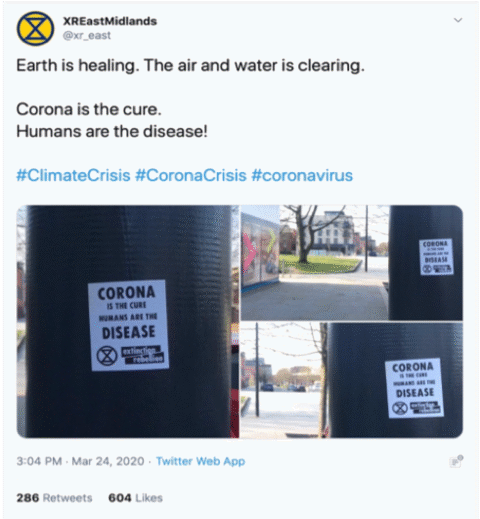 Unfortunately, the author of the tweet is not alone in espousing extreme views. The same unhealthy sentiments have emerged elsewhere. One Twitter post exclaimed, “Wow…Earth is recovering. Air pollution is slowing down, water pollution is clearing up, natural wildlife returning [sic] home. Coronavirus is Earth’s vaccine. We’re the virus.” As of the end of March, this post had received over 290,600 likes and 70,900 retweets.

Sadly, human self-loathing has always played a role in the environmental movement. That doesn’t mean that the entire movement embraces this attitude; it doesn’t. But its policies are certainly influenced by it. Any serious student of the movement should not ignore it or pretend it doesn’t exist.

As a university student studying environmental ethics, I was repeatedly given readings from academics like Princeton University bioethicist Peter Singer. Singer is (in)famous for his utilitarian argument that “the life of a newborn [human] is of less value than the life of a pig, a dog, or a chimpanzee.”

Many of our class discussions also tried to grapple with ideas like defining a “truly sustainable” human population. Some argued that we would need to take the total human population to as low as 500 million to achieve “true” sustainability. Other notable academics, like Stanford University biologist Paul Ehrlich, allowed for higher, but still heavily restricted, numbers. In a 1994 Stanford news release, Ehrlich advocated for drastic reductions in human population, arguing “the optimum number of people to exist on the planet at any one time lies in the vicinity of 1.5 billion to 2 billion people.” Those of us in the class who valued human life took it upon ourselves to demand protections for the billions who had been summarily ruled as “unsustainable.” A strong and unwavering commitment to human flourishing should be a primary focus for all policy experts, academics, elected officials, government employees, media, and the public at large.

Anti-human attitudes have been clearly identified by authors like Robert Zubrin, who points out how a “fictitious necessity” is often used to justify policies that could pose real harm to human well-being if they were implemented. Zubrin notes that proponents typically claim an essential resource, or a group of resources, is limited and then forecast an ecological breakdown as a result of the shortage. Policymakers and academics attack the greed and growth of human populations they claim are straining the planet’s ability to provide that resource. To avert the catastrophe, they argue, they must be given immediate and overriding authority to manage the resource in a way they are convinced will reduce the strain of these human-caused pressures.

Similarly apocalyptic tones are influencing the current discussion over climate and environmental policy, and they undergird proposed policies like the Green New Deal. In fact, the author of that legislation, Rep. Alexandra Ocasio-Cortez, D-New York, claimed her plan was essential to forestalling a global climate collapse. In a January 2019 speaking engagement, Ocasio-Cortez warned, “The world is going to end in 12 years if we don’t address climate change and your biggest issue is how are we going to pay for it? … This is the war — this is our World War II.”

Now, in the midst of the coronavirus-fueled media frenzy, some reports are describing how “Satellite images show less pollution over the US as coronavirus shuts down public places.” According to others, "the Earth has already begun showing signs of amazing things happening from the absence of human pollution.'' Shut-downs of economic activity have caused transportation-related pollution to momentarily decrease and wildlife sightings to increase in our built environment. Some of the more extreme in the environmental movement have commented that this reduction in human activity is the “#SilverLining” of the virus and that “There’s something very beautiful about nature never giving up,” as “animals are reclaiming human spaces."

"CORONAVIRUS: 15 STUNNING PHOTOS SHOW HOW ANIMALS ARE RECLAIMING HUMAN SPACES: “There's something very beautiful about nature never giving up and showing us that we're temporary in the scheme of things.”#CoronaVirus #Population #SilverLininghttps://t.co/W1cxSZxxyu

Social media participants have posted cartoons that depict COVID-19-related “before and after” pictures of the Earth. The pre-virus Earth is coughing and sick, while the post-virus Earth is serene and smiling — content now that it is free from human influence.

But associate professor and epidemiologist at McGill University Jill Baumgartner strenuously objects to the notion that the damage caused by the COVID-19 virus provides any reason to celebrate. She points out that, at most, the changes in human activity are temporary, and the massive economic disruption brought on by the virus will devastate national economies and people around the planet.

Baumgartner also points out that viral videos claiming the suddenly clear water in Venetian canals is being repopulated by swans, fish, and dolphins are effectively fake news. As National Geographic explains, the videos of dolphins swimming in Venetian canals were actually filmed at coastal areas in Sardinia, an area where dolphins are known to regularly congregate. The swans, also seen in Venetian canals, were common before the virus reduced human activity. National Geographic also explained that the “clean” water in Venetian canals is actually just “clearer, not cleaner” because boat traffic in the canals stirs up sediment. As boat traffic has diminished, those sediments have settled; the now-visible fish have always been present in the canals.

Everyone wants to have cleaner air and water, so it’s not unusual for people to take pleasure in seeing improved environmental conditions. But the human activities being depicted as destructive are the very activities that keep us fed, give us clean water to drink, clothe us, keep us warm (or cool in the summer), and give us the ability to fight back against the COVID-19 virus and other illnesses.

It’s unfortunate that we have to clarify something so plainly obvious, but sometimes you will need to be the unwavering voice that rejects the negative and scary headlines. Don’t shy away from defending human lives; they’re inherently valuable. Don’t be afraid to clearly state that any belief system which believes halting life-sustaining activities is “beautiful,” or that rejoices in the impacts of a deadly virus on human health, is an unsustainable and suicidal fantasy.