Ridesharing Gets Rolling in Michigan 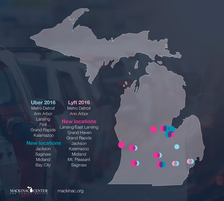 We’ve written a lot about ridesharing over the last year, explaining why services that use smartphone apps to link people who have cars with people who need rides are good for Michigan.

Two companies stand out in the ridesharing business in Michigan: Uber and Lyft. When we started talking to drivers a year ago, Uber was operating in six cities (metro Detroit, Ann Arbor, Lansing, Flint, Grand Rapids and Kalamazoo). Lyft was operating in only two (metro Detroit and Ann Arbor), although it expanded in summer 2016 to include the Lansing and Grand Rapids areas.

But these companies, and more importantly, the people who drove for them, were operating in a legal gray area. Michigan law didn’t have a place to put ridesharing, and some drivers received tickets for lacking a license they didn’t explicitly need. The companies were slow to expand, or not expanding at all, because of the uncertainty surrounding regulations.

Ridesharing provides jobs and a safe ride home. It correlates with safer roads and less crime. Allowing these companies to continue operating in a gray area jeopardized their future expansion and innovation in Michigan. Some drivers warned that passing the wrong rules and regulations for ridesharing could force the companies to pull out of the state completely.

Thousands of additional Michiganders can now take advantage of cheap, easy transportation through ridesharing as a result of last year’s changes. Hopefully, even more will have access soon as the companies expand into new markets. It’s another example of the positive impact sensible regulations can have on a state.