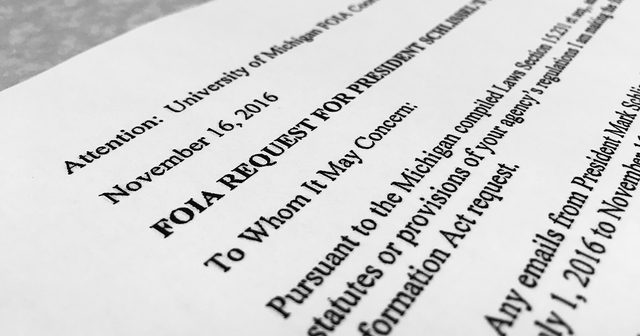 Delay of 106 days results in lawsuit for University of Michigan

Government transparency tools like the Freedom of Information Act are one of the best ways to hold public officials and employees accountable for their actions. But they only work when government agencies respond quickly and efficiently.

In November, Mark Schlissel, president of the University of Michigan, generated press with some disparaging comments about then President-elect Donald Trump and those who had voted for him. Curious about the thought process behind those remarks, Michigan Capitol Confidential reporter Derek Draplin submitted a FOIA request to the university for any emails Schlissel had sent between July 1 and Nov. 16, 2016, that included the word “Trump.”

The university said it would take less than three hours to fulfill the request, but still took more than 100 days to send the documents. On March 2, 2017, the Mackinac Center Legal Foundation filed suit to protest the delay.

"There's no way it could possibly take 100 days to provide four emails," says Wright. "It's beyond the pale."

Wright says the emails that were provided were not "egregiously" embarrassing.

He says the University is wrongly relying on a part of the state's FOIA law that allows a "reasonable" amount of time to comply, after a requester has provided a good faith payment of half the cost of the complying with the FOIA.

Wright says it would be better if state lawmakers were to modify the FOIA law to provide a deadline for "reasonable" amounts of time to comply with requests. Barring that, his group plans to continue filing similar cases to establish case law that will define it.

The Michigan Daily, a campus newspaper for the University of Michigan, also covered the story:

“In his professional role as head of a public university, President Schlissel took a very public stance against President-Elect Trump and the people who elected him,” Mozena said. “Our CapCon team was interested in learning more about the decision-making process that led to the actions taken by this public university and its employee, and filed the FOIA request accordingly.”

Michigan’s open records law requires government agencies and public institutions such as the University, to respond to requests within five business days. However, through a series of articles in the FOIA that permit and outline circumstances for the deferment of requests, the request kept getting delayed.

Although the documents were eventually sent to the Mackinac Center, the lawsuit continues. Timely responses to transparency requests are paramount for holding government accountable, and excessive delays impede that important work.