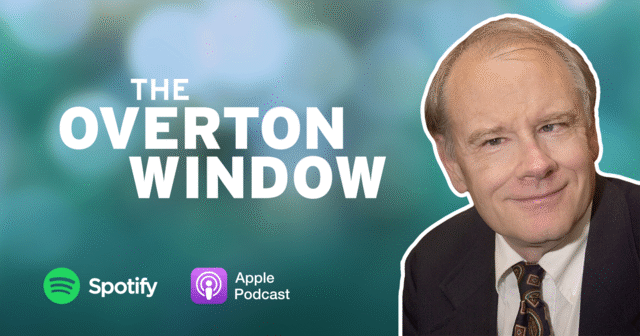 Richard Vedder on his career as a policy advocate professor

All college professors have a political bent, but few of them engage in the debate on public policy. One who does, and does it like nobody else, is Richard Vedder, the distinguished professor of economics, emeritus, at Ohio University. I talk with him about his public policy career and how academics can help policy advocates on this week’s Overton Window podcast.

Vedder started his work in politics in 1984. “I got a telephone call from a congressional office asking me if I would recommend someone to work in Washington D.C. for the Joint Economic Committee of Congress,’” Vedder says. “And, of course, I volunteered myself because I thought, ‘Hey, that would be kind of a cool change from the normal academic routine. So, after being interviewed by a member of Congress who wanted to be sure that I wasn’t crazy, or excessively crazy — a lot of people in Washington are already crazy — I accepted the job.”

While making friends and developing contacts at the Joint Economic Committee, Vedder decided to get into political commentary.

He also dove into state policy activism, too. Ohio didn’t have an income tax until 1970, and by 1983, lawmakers taxed 9.5% of the income people earned in its highest tax bracket. “We — a bunch of politicians that I allied with — we managed to get a referendum voted on by the Ohio population to roll back the income tax increase. It failed because we had almost no money and the other side spent $5 million, probably $10 million or more in today’s dollars,” Vedder says.

Tax cuts got approved after Republicans took majority control of Ohio’s government. “This wasn’t Republican or Democratic to me — that wasn’t the issue,” Vedder says. “It was good policy vs. bad policy but it turned out that I align more often with Republicans than Democrats, which is ironic since my grandfather was the chairman of the Democratic party in your state, in Michigan. He was the nominee for governor of Michigan once. So, I come from a very distinguished Democratic Party Michigan heritage, and yet here I am lowering taxes.”

His employer and his colleagues don’t always like the things that he does, but he is a tenured academic and doesn’t need to worry about it. “There are good arguments against tenure but it is true that tenure provides protection to unpopular people making unpopular statements. In this day and age there’s so much craziness in the universities,” Vedder says, noting that sometimes colleagues try to get others fired over their political opinions.

“The governor of the state of Ohio called a press conference to attack me, which I thought was the ultimate moment of professional success,” he says, “I wouldn’t have thought that if I didn’t have tenure.”

We talk about Vedder’s work on prevailing wages policies, where governments have to pay union scale wages on its construction projects. He wrote a study for the Mackinac Center about the issues in 1999, using a clever method to show that prevailing wages cost taxpayers.

“It was political shoplifting, in a way. We were taking money from the general taxpaying public and giving it to a relatively small number of privileged workers who have some political clout,” Vedder says. Lawmakers ended the policy in 2018.

He’s also called for changes in higher education but is embarrassed by his lack of success. “What have I accomplished? Nothing! Well… I wouldn’t say nothing.” Vedder served on the Spellings Commission during the Bush Administration, “and we made some marginal progress,” he says.

“I think I, and a lot of others, have raised awareness in the general public that higher ed is not a bunch of saints who are interested in serving the public,” he says. “They are mostly rent-seekers, as we call them in economics. They’re out to have a good life for themselves.”

Vedder’s lack of progress in higher education indicates that, as a tenured academic who engages in the policy debate, he’s chosen difficult issues. He’s worked on a lot of policies he thinks are good ideas, even if they were outside of the Overton Window. That includes prevailing wages and right-to-work, which were outside of the window when he began calling for them and are now enacted policy in Michigan. Perhaps his recommendation to fund students rather than systems in higher education might become policy, too.