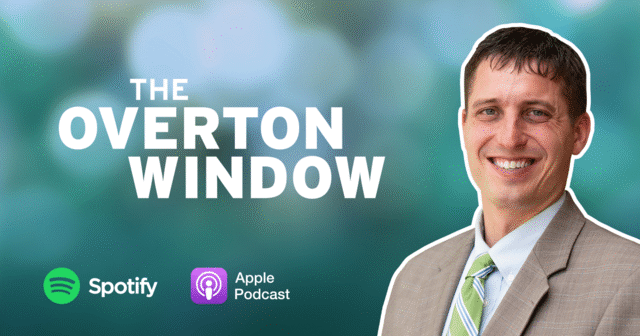 ‘How is this policy tough on crime if they’re not charging people with crimes?’

Shifting the Overton Window can take a lot. It can take important research to answer vital questions. Digging deep to tell the stories about the people harmed by the status quo, clever marketing and careful outreach. And lots of patience. Jarrett Skorup helped put all of these together for his work to change Michigan’s civil asset forfeiture laws, and I speak with him about it for this week’s Overton Window podcast.

It is appropriate that police have the ability to take ownership of property. “Criminals shouldn’t profit from illegal activity,” Skorup says. “That’s the ideal thinking behind it.” The principle is that governments should take ownership of the gains from illicit activity when they find it.

Skorup’s issue is that too often people lose their property without even being charged or convicted of a crime. The civil legal process is different from criminal procedure, and requires a lower standard of evidence for people to forfeit their property.

While it might sound as if governments can choose either to allow these forfeitures or not, there is a range of options in the conditions that lawmakers can add to their use of the power. States can have bonding requirements that make people pay money in order to challenge a forfeiture, and legislators can reconsider that requirement.

They can change the standard of evidence that is required in order to allow forfeiture. “The standard of evidence in civil court, years ago, was the preponderance of evidence. Basically, more likely than not. And you could forfeit a vehicle over that as opposed to requiring beyond a reasonable doubt [as it is in criminal court],” Skorup says.

One of the conditions that lawmakers added in Michigan was a requirement for police departments to report on their use of their forfeiture powers.

Skorup helped lawmakers with all of these in a series of changes starting in 2015. He started by studying how police were using their powers. “The people who are harmed by this tend to be low-income. They tend to have very low assets. The typical amount of cash seized from the 6,000 forfeitures in Michigan is about $200. The typical worth of the vehicle taken is $3,000 - $4,000,” Skorup says.

He worked to get support from other groups including the criminal justice advocates and some law enforcement groups as well as current and retired police officers to help make the case to lawmakers.

Skorup used public record requests to find people who have been harmed by civil asset forfeiture policies to document those cases. Others reached out to him on their own to tell their stories, like the Ostipow family in rural Shiawassee County. After police found marijuana plants grown by their son in a home they owned nearby, the police seized thousands of dollars in cash, a classic car and even the home of Gerald and Royetta. They were never charged with a crime, but had to fight for a decade to try and get their property back.

“You always have anomalies in society that everyone will use to push some public policy objective,” Skorup says. “What we were doing was saying, ‘Here are some people who are representative of something that happens hundreds or thousands of times every year.’”

He kept at it, and the coalition he worked with won a series of changes to forfeiture rules. They eliminated the bond requirements. They increased the standard of evidence necessary to allow forfeitures. And, with exceptions, they required a criminal conviction to be made before property can be forfeited to government.

There is still more he’d like to accomplish on the issue. “I might be involved in illegal activity in some way but that doesn’t mean that I gained my car or my bank account or my home from that criminal activity,” Skorup says, “The solution that we push for — and what five or six states have — is called criminal forfeiture.” That’s where after a conviction, a judge and jury determine what assets the perpetrator obtained through the crime and allow that to be turned over to the state.

He thinks that he’ll be able to get this change made. “I am pessimistic over the short term but I’m optimistic over the long term,” Skorup says, “I’m going to need lawmakers who really want to take up criminal justice issues again in a bipartisan way. I’m eternally optimistic that we can find those.”