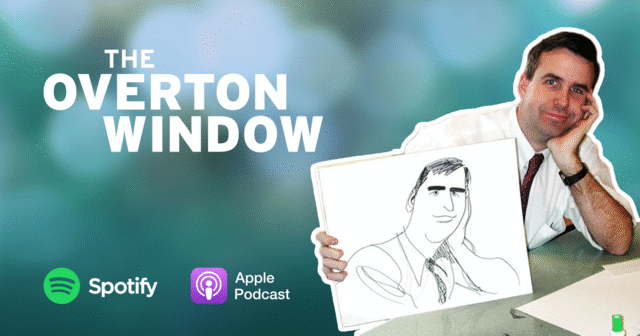 Editorial cartoonists can say a lot with few words. And their work has been beloved by newspaper readers for decades. I speak with editorial cartoonist Henry Payne about how it works and the effect cartoons have on the policy debate for this week’s Overton Window podcast.

“You have one rock to throw every day in a sea of news and visual information. So I think a cartoon that is as simple and succinct as possible, and as visual as possible, is the best way to make that impact,” Payne says.

The cartoons in the New Yorker are an inspiration for his work, where the pictures are simple with sparse text. “Good writing is important. Whether you’re in advertising and trying to get somebody to pay attention to a billboard as you go down the interstate, or whether you’re trying to do a punchline in a cartoon in a newspaper or a website, really sharp writing is important,” Payne says.

Some subjects are easier to depict than others. “Trump is really easy to draw, and Biden is really hard to draw,” Payne says. He’s trying to make a simple and visual joke, so it helps to have something to parody. “Trump is a big man, he’s not only got obvious visual representation with his orange hair and big jowly face, but he’s got a personality, an outsized personality.”

Biden lacks those traits. “Visually, he’s a pretty standard issue pasty eighty-year-old. I think as a younger man when had hair, that might have helped. But he doesn’t have any obvious visual features,” Payne says, “So he’s a much more subtle caricature.”

Payne wants his cartoons to get across a point, and the point is often offensive to the subject. “Satire is difficult. It’s an art form that’s easily misunderstood because we’re dealing with exaggeration, we’re using metaphor. I frequently dress politicians up as cheerleaders or depict them as animals,” Payne says.

“I think Donald Trump did some remarkable things as president of the United States,” Payne says, “But I think at this point he’s become a bit of a joke.” So he depicts the former president as a turkey with a simple cut line in a cartoon to establish that he thinks Trump is yesterday’s news. 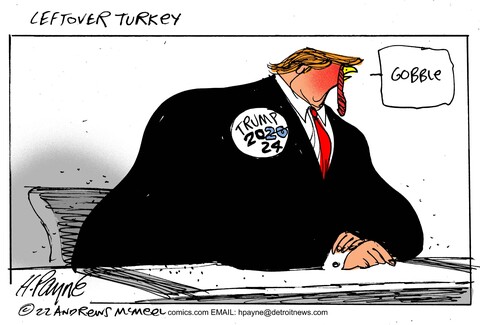 Payne’s intended effect of editorial cartoons is clarity and intensity. A good cartoon distills an idea to its essence and gives readers a strong feeling about it. He cites this cartoon about the Babylon Bee’s return to Twitter, after having been removed from the site by the social media platform’s moderators. 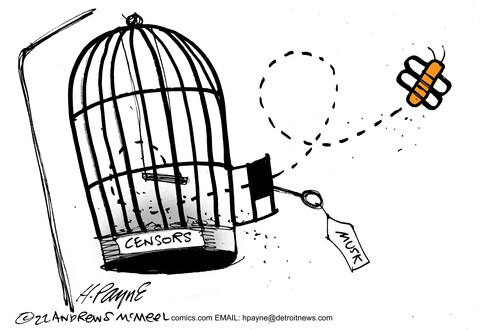 He notes that it’s a funny image that someone can grasp quickly. Even if a person isn’t familiar with this issue, it’s enough that they could search the internet for articles to get caught them caught up.

Not every public policy figure appreciates the caricature. “The national politicians tend to have a little thicker skin. They’ve been in the game longer. They know what they’re dealing with,” Payne says, “I don’t do as many local cartoons as I used to, but if you’re drawing a mayor of Detroit or you’re drawing a governor of Michigan you tend to get a lot more blowback.”

“The interesting thing about this game — as you say, there are big egos involved — nine times out of ten they want the original. They want the cartoon to put on the wall. They like being recognized, they like being famous,” Payne says. He says that former gubernatorial candidate and famous lawyer Geoffrey Fieger’s staff would call for every original cartoon Payne made of him.

“I see myself as a humorist first and foremost. In this hurly burly give-and-take of politics every day, I’m very aware that I want to elicit a chuckle or a nod of cleverness,” Payne says.

The cartooning business has changed a lot. It used to be that cartoonists could have to wait five days before their works would be printed in newspapers. “It would have to go through the U.S. mail, it would have to get placed on a page, shot by a camera, and put in a newspaper. Today I can draw a cartoon and it can be up on a client’s website within an hour,” Payne says.

Newspapers used to be the primary place where editorial cartoons would be printed, and they seemed to feel an obligation to criticize the people in power. People are online more and use social media as an intermediary to get cartoons. Payne is worried that social media moderators don’t have the same stomach to deal with political parody that newspaper editors had.

“You have bots out there searching to take down ideas that political parties don’t like and so cartoons have gotten swept up in that. Satire sites like the Babylon Bee have gotten swept up in that,” Payne says. “I don’t think I ever had a member of the U.S. Postal Service withhold a newspaper from somebody’s front porch because they thought it was counter to a political interest.”

“The promise of social media is tremendous, and it’s really been sad to see these large tech firms colluding with political parties at Facebook, at Twitter, and trying to interrupt this wonderful tool that you can be so direct with people,” Payne says.

Payne acknowledges that this art form is controversial, and he’s grateful for the First Amendment’s protections of free speech that allows him to continue. “Take a look at our neighbor to the north, Canada, that does not have a Bill of Rights and where journalists are routinely shut down by the government,” Payne says.

America’s commitment to open political discourse has made him concerned about journalists’ newfound interest in moderated political debate. “I must say I never imagined a time in my 30 years in this business in which my colleagues in the press would be embracing censorship. You know, embracing the idea that the Babylon Bee could be taken off Twitter or that a critical cartoon I drew about Joe Biden would be flagged on Facebook simply because I was criticizing the president of the United States,” Payne says.