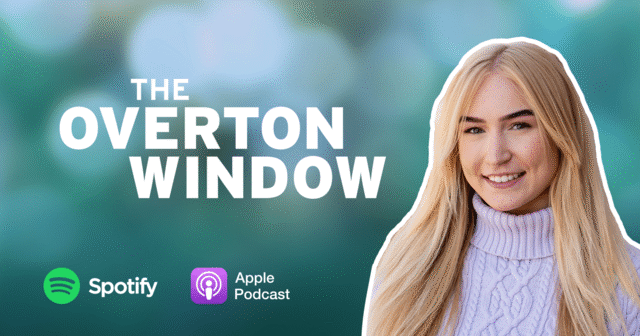 “Get Out There, Motivate Others, And Do What You Believe In”

One of the long-standing strategies to get long-term political change is through youth engagement, especially on college campuses. Jarrett Skorup spoke with Tori Aultman for the Overton Window podcast about her experience launching a school debate and activism club at her university.

Aultman had worked on the John James for Senate campaign, and his speeches motivated her and some friends to be more engaged on campus. So she and one of her friends started a Turning Point group at Saginaw Valley State University last year. “It’s a nonprofit, nonpartisan political organization that works to advance and educate on the principles of limited government, free markets, individual liberties and freedom.”

The successful launch of this group stands at odds with the reputation that colleges have as havens for progressive students. Yet Aultman has been encouraged by the group’s reception among her fellow students. “SVSU is better than a lot of colleges, and I think we’ve been grateful for that. [And] for our smaller campus and students just being more respectful of differing opinions,” she said, “SVSU hasn’t been the worst. We’ve definitely heard horror stories from our other chapters in other universities.”

Part of her goal has been to establish a place where her fellow students want to talk about ideas. “We want to reach as many students as we can,” Aultman said. She adds that she is “creating that safe space for civil discourse that isn’t necessarily popular on campuses but is needed.”

“We have Democrats, Republicans, Libertarians in our club and we all have the same conversations and it’s civil. That’s what we want to do, have different points of view brought up and talked about,” she said. “We meet to talk about policy. We talk about fiscal policy, where our nation is, what’s on track, what’s not.”

Her group, launched at the beginning of the COVID-19 pandemic, started with online seminars. It hosted a former member of Antifa, who offered some perspectives on a movement that was in the news a lot during 2020. Students also heard from a lawyer on First Amendment rights on campus. And Venezuelan asylum seeker Andrés Guilarte talked with chapter members about his experience under the country’s socialist dictatorship. They even gave out cocoa on campus on their “Cocoa for Capitalism” day.

It was difficult to get the university to recognize the chapter. “We’re now officially a registered student organization on our campus. That wasn’t the case off the bat. It was incredibly difficult to find an advisor.” Each student group needs a professor to serve as a sponsor, and she struggled to find anyone. She emailed a lot of professors who worked in related fields but could get anyone to agree.

For a while, the chapter was not an official college student group. So it operated as a public group, trying to use the access that the public gets on college campuses.

Aultman and her fellow members weren’t always welcome. They organized a 9/11 memorial and tried to follow school pandemic precaution protocols while holding it. They were social distanced, masked, and had sanitizing stations. Yet the campus police still asked them to leave, on the grounds they were violating COVID precautions. There was a protest on the campus at the same time, and it followed few official precautions, yet university officials allowed it to proceed.

And she’s been encouraged by her work and hopes that it is helping her fellow students. “Success lies in motivating others and helping others find the tools that they need to better themselves.”