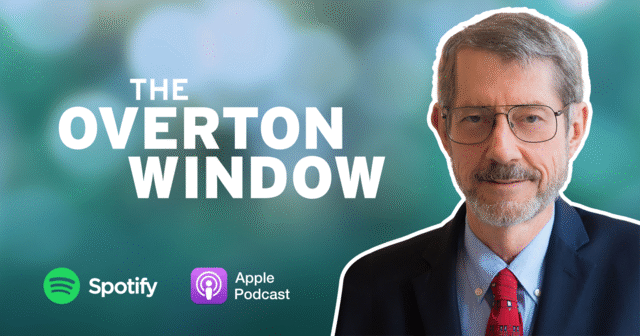 ‘What we have now is a system that’s run by politicians, and it works poorly’

When people are stuck in traffic or do the pothole slalom down a broken road, they ought to wonder whether governments can do a better job of running the roads. Bob Poole thinks they can and has been helping governments improve surface transportation policies for over three decades. Poole is the director of transportation policy and Searle Freedom Transportation Fellow at the Reason Foundation, and I speak with him for this week’s Overton Window podcast.

Poole says that there are major problems with the way transportation policy is structured in America. Roads are owned by governments, and the politicians in charge of them lack good political incentives to solve transportation problems.

Politicians, for instance, don’t get much benefit from funding the regular maintenance necessary to keep roads in good working order.

“We have a politically dysfunctional system that often picks boondoggle projects that have benefits far less than their costs,” Poole says. He adds that important projects often get neglected because they don’t occur in enough legislators’ districts.

He says that a better way to do this is to operate roads like regulated utilities, which are paid for by their users and operate in a competitive environment with government oversight. This changes road transportation from a political service responding to political incentives into a market system that responds to customer needs. “You pay a bill based on how much you use. It goes directly to the provider. Providers are responsible for 100% of the capital costs of building the facilities and maintaining them, and are subject to some kind of oversight,” Poole says.

Roads are owned by state and local governments, and those governments should be responsible for funding them. “They’re not really taking that seriously enough and I think part of the problem is that Congress continues to shovel money to the states,” Poole says.

That includes the federal government’s borrowing hundreds of billions to pass along to states through the 2022 infrastructure bill. “It creates the impression, ‘Big Brother in Washington is giving us free money. We don’t have to worry about what roads cost,’” Poole says.

Because of the lack of user fees, the potential to get someone else to pay for roads, and all the other bits of strange politics around transportation, state lawmakers don’t keep their roads in good working order. They don’t seem to care to fix congestion problems. And they don’t have a lot of reason to help people get where they want to go.

Poole has spent a long career getting governments to experiment with user fees and private ownership. One idea he’s gotten multiple governments to adopt is the express toll lane. Poole thought he could address congestion by designing a lane on a highway that drivers pay to use, and where the price is enough to keep the lane free flowing even during rush hour. He wrote about the idea in a 1987 paper. “I had an attraction to road pricing many years before coming up with that,” Poole says, “Living in L.A. and confronting this horrible congestion commuting to the Reason Foundation, I said, ‘I’ve got to do something about this.’”

Due to a rejected transportation bond initiative, California’s governor at the time decided to try out Poole’s idea and launched four express toll lane pilot projects. There were opponents who argued that it would be just as congested and would bilk users. Others argued that it would be an expense that no one would pay for. “It turns out that was all wrong. It worked beautifully,” Poole says.

“We now have 60 of these in operation around the country, and probably another dozen in the pipeline,” he says.

Another success he’s had is to get governments to engage with companies in long-term leases of roads. When done right, this gets a private company to keep roads in good working order, and to use best practices to improve quality and keep costs down. “We now have about two dozen billion-dollar pilot projects — highway additions, bridge replacements and new toll roads as well as express toll lane projects — all privately financed,” Poole says.

He also says that other countries have been more adept at launching these kinds of projects, citing projects in Brazil, Chile, Argentina, France, Italy, Portugal and Australia.

As with express toll roads, people raise concerns about privately financed roads. People are concerned about companies charging too much and others about potential corruption involved in long term leases.

Poole recommends that government managers spend a lot of time thinking through exactly what they want out of public-private partnerships. If the project is primarily paid by tolls, then state governments need to be clear on what tolls are acceptable. They need to decide how to handle adding lanes or new interchanges if demand exceeds expectations. They need to set up a process to resolve disputes if they arise.

“They have to decide in advance what’s a fair way to handle those things,” Poole says, “The procurement process is typically longer and costlier than it is for just building an extension of a road with normal contractors.”

There also ought to be competition among private entities for the partnerships to ensure that the public gets the best deal.

Public-private partnerships have to live up to multiple market tests in order to get off the ground. Equity investors have to put their money at risk. The same goes to bondholders who lend money to the project. Drivers themselves have to think that paying tolls is a better option than alternatives.

His idea to operate roads like regulated utilities is outside of the Overton Window right now, and this is due to a lack of trust on the public’s part. Express tolling can be viewed as a way to bilk drivers for more money. Public-private partnerships can be viewed as a vector of corruption.

Poole is trying to change that. Pilot projects help to demonstrate that these ideas can improve transportation. “That’s an empirical test. We can see whether the kind of things that people fear actually start happening or does it live up to what we say it’s supposed to do?” Poole says, “There’s more and more data available on how these things work.”

Over his career Poole has helped get a number of these projects off the ground. He studies their effects, promotes successes and learns from failures. He’s been at the forefront of a lot of changes in transportation policy and his worked has helped a lot more people get where they want to go faster, more reliably, and cheaper.