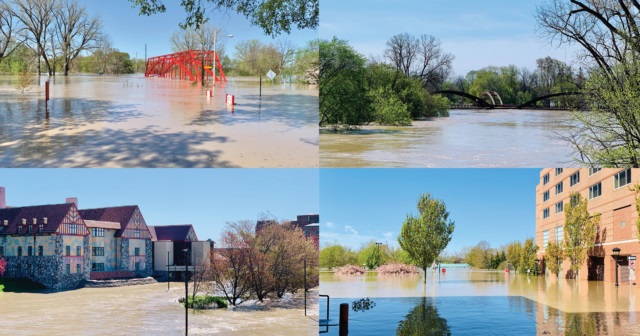 To many of the people living near the failed Edenville and Sanford dams, it seems like last year’s flood was only yesterday and, at the same time, almost a lifetime ago. On the evening of May 18, residents began receiving emergency text messages, warning that runoff from several days of extreme rain was threatening the stability of the Edenville Dam.

The messages encouraged residents along Wixom and Sanford lakes, and downstream along the Tittabawassee River, to evacuate — and with good reason. By May 19, the rain that had fallen in the area over the previous several days swelled Wixom Lake and proved to be more than the nearly 100-year-old Edenville dam could withstand.

As the dam failed, a deluge of water and debris washed away a 900-foot-wide section on the far east, or Tittabawassee River side of the earthen embankment. The force of the water being released caused the Sanford Dam, just a few miles downstream, to fail as well. Water from the heavy rains and two lakes, now a powerful force, continued down the river, cresting in Midland at approximately 24 feet higher than normal.

In the aftermath of the flood, more than 10,000 residents had been evacuated, and the area suffered over $200 million in damage. More than 2,500 homes and buildings were damaged by the water and debris. Surprisingly, there were no fatalities.

Our report, “The 2020 Midland County Dam Failure,” provided specific details on the causes and outcomes of the flood. Of primary interest to area residents and the state were the causes of the dam failures and the plans to ensure something like this would not happen again. Our report noted, the dam’s owner and state regulators “allowed for the conditions that enabled a historic flood to push the Edenville Dam to rupture.”

Since we published the report, several official reviews appear to have confirmed our initial take on the dam failure.

Facing numerous civil suits for its prolonged history of safety and regulatory violations, Boyce Hydro, which owned the failed dams, has filed for bankruptcy. It’s doubtful that residents who were harmed by its actions will receive compensation.

Ongoing litigation against the dam owner was also compounded by a $15 million civil penalty levied by the Federal Energy Regulatory Commission on April 15, 2021. FERC is the federal entity that held regulatory jurisdiction over the hydroelectric generation stations at the Edenville and Sanford dams. It had revoked Boyce Hydro’s license to operate the hydro project at the Edenville Dam in 2018 for chronic and repeated refusals to adhere to basic safety and operational regulations.

After the dams failed, the Association of State Dam Safety Officials was invited by Michigan’s Department of Environment, Great Lakes, and Energy to complete a Peer Review Report of the state’s Dam Safety Program. That report was publishjed in September 2020. The DSP is described on the EGLE website as the state government office “responsible for ensuring the safety of Michigan's state regulated dams.” The peer review evaluates whether the state government is adhering to “generally accepted standards of practice for dam safety engineering and management.”

ASDSO said there was a team of “dedicated, well-educated, experienced engineers that are doing the best they can” in the state’s Dam Safety Program. But according to the association, the DSP was “extremely understaffed,” underfunded, and had, for more than a decade, avoided using “rigorous enforcement of dam safety violations.” The association report pointed out that many of the dams across the state have gone past their design life and have not been rehabilitated or even reevaluated. This lack of rigorous enforcement, it said, has “exposed those living downstream of non-compliant dams and the environment to the consequences of dam failure.”

The ASDSO report also provided a string of recommendations. Among them: The state should dedicate additional funding to ensure that it evaluates existing dams and makes sure they are rehabilitated. It should also, the report said, hire additional DSP staff to ensure proper monitoring and enforcement of dam safety measures.

A second investigation into the dam failure was carried out by the Department of Environment, Great Lakes, and Energy’s Dam Safety Task Force. This report followed the ASDSO report in February 2021, with the partial goal of “tailor[ing] the ASDSO’s recommendations to Michigan.”

Unsurprisingly, the DSTF report mirrors many of the ASDSOs recommendations, including increasing state funding for the Dam Safety Program and creating a low-interest loan program to encourage dam owners to remove aging dams, or to engage in regular maintenance and rehabilitation.

The state report recommended that DSP staff be given the flexibility to make and enforce orders requiring dam owners to alter lake levels from any court-ordered levels during emergency situations. As we noted in our report, both EGLE and the attorney general’s office had ordered Boyce Hydro to bring Wixom Lake — which was formed by the construction of the Edenville Dam — back to court-ordered levels prior to the May rain event. Boyce had argued that doing so would put the dams at risk of failure due to spring runoff, or could endanger workers during winter months.

Among its string of recommendations, the task force advised state officials to create, and make publicly available, a statewide assessment of dams. It also called for improved education initiatives, signage, and mapping. The task force called for its recommendations to be implemented “in collaboration with local, state, and federal agencies; tribes; and national organizations.”

Also mirroring the findings of the Mackinac Center report, the Four Lakes Task Force has continued to play a leading role in flood recovery and restoring and repairing the four dams in the area. The Edenville and Sanford dams suffered the worst of the flood-related damage, and the Secord and Smallwood dams are further upstream on the Tittabawassee River.

Reporting from the FLTF indicates that, with Boyce Hydro insolvent and unable to manage the remaining dam assets, both Gladwin and Midland counties used eminent domain to take control of these properties and obtained title to them in December 2020. The counties appointed FLTF as their delegated authority to manage repair and restoration efforts.

As of mid-March this year, FLTF reported, the stabilization work on the Secord and Smallwood dams had been completed. The temporary bridge over the damaged section of the M30 Causeway has been built and opened to traffic. Reconfiguration and initial repairs on the Tobacco River side of the Edenville Dam have also been completed. Those repairs were undertaken to reduce the potential for additional spring failures and flooding and to restore a normal flow from the Tobacco River spillway (west side) of the Edenville Dam.

A great deal of work remains to be completed on both the Tittabawassee River spillway and embankments at the Edenville Dam and the Sanford Dam. FLTF has targeted restoring lake levels on Secord and Smallwood lakes by 2024, Sanford Lake by 2025, and Wixom Lake by 2026.

In another response to the recommendations of both the ASDSO and the DSTF, the Michigan Legislature has just proposed an additional $500 million in funding to repair these aging dams and to upgrade or repair other high-risk dams across the state. This is a far different state posture than was seen before the flooding, when Gov. Gretchen Whitmer had recommended significant cuts to state expenditures on dam safety programs. It is also more than double the amount recommended by the Dam Safety Program in the state’s 21st Century Infrastructure Commission Report.

In the months after the Mackinac Center report released its report, additional work completed by the ASDSO and Dam Safety Task Force have reinforced those findings. For a variety of reasons, including lack of funding or budget cuts and lack of staffing, Boyce Hydro and the state government were both involved in creating or allowing the conditions that led to the failure of the Edenville Dam on May 19, 2020. With Boyce Hydro now incapable of compensating the people or the state for its actions, it is, unfortunately and inevitably, now up to the taxpayers to cover the cost of restoration and revitalization.

This brief recounting of the work done to restore and repair the damage caused by the May 19, 2020, flood only touches on the ongoing efforts. There is a great deal of additional information available, including the following: