When prices go up, quantity demanded goes down

The minimum wage has been in the news a lot lately due to proposals at the state and federal levels to increase it and because of a February Congressional Budget Office report on the subject.

Among all the policy subjects up for debate, there is perhaps no easier conclusion to draw than that minimum wage mandates are jobs killers.

Both economic theory and empirical evidence — despite some recent claims to the contrary — make it clear that mandating an artificially high minimum wage leads to job losses.

First, consider the theory behind the economics. Basic price theory informs us that there is an inverse relationship between the price of just about anything and the quantity demanded of it.

The graphic below demonstrates a simple demand curve. On the vertical axis is the price of labor, marked by PL1. On the horizontal access is QL1, which is the quantity of labor demanded at that price on the vertical axis. 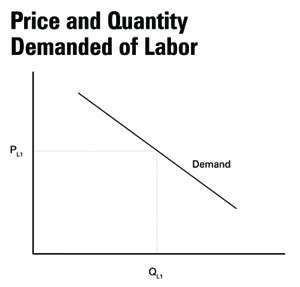 If the government commands that a higher wage be paid to labor (below) — artificially moving PL1 upward to PL2 — the quantity demanded for labor must by definition fall to QL2. 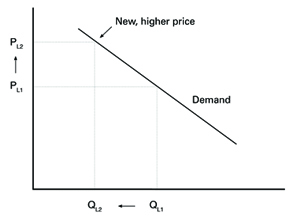 Second, we have scholarly empirical analyses published in peer-reviewed journals by academics. A 2007 review of this literature by David Neumark and William Wascher supports the contention that minimum wage mandates have a negative effect on jobs. Their review of studies from 1990 forward indicates that some 85 percent "of the most credible evidence" suggests that these higher mandated minimums hurt employment.

Last month the Congressional Budget Office released a report on the economic effects of increasing the federally mandated minimum wage to $10.10 an hour. They concluded that from the perspective of the federal budget all the pluses and minuses would net out evenly. That is, no real gains or losses over time.

They observed that about 500,000 people would lose their jobs while another 900,000 would be pulled just a little above the federal poverty line. In other words, for every two people lucky enough to keep their jobs, one would lose their job entirely. Of those 900,000 who do better, it is only marginally with the average income of families being lifted "by about 3 percent …"

Writing for the Cato Institute in this month's, “Tax & Budget Bulletin," economist Joseph Sabia notes that the CBO's estimate of job losses may be low because it took "a lower bound estimate" of potential changes in employment of lower skilled persons.

The economic evidence in support of a higher minimum wage amounts to pretty thin gruel.

Rather than being a help to poor people, on net balance it hurts people and is apparently no great friend to government treasuries, either. The CBO estimates a wash, but its estimate of employment losses may be on the low side.

A better solution to helping low-wage earners would include removing obstacles to creating and obtaining jobs, not building more of them.