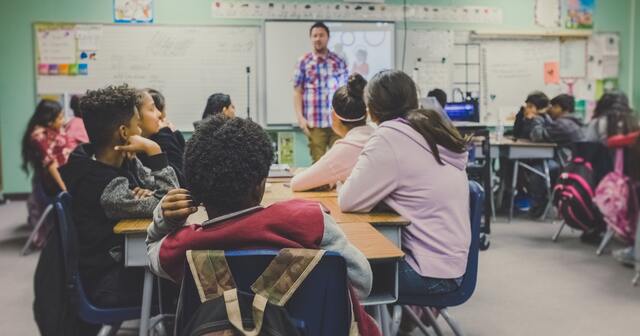 Some government officials and their allies desperately want to tell a story of Michigan education funding woes, powering a push for more taxes. But a fuller look at the numbers pours some cold water on their overstated, or even misstated, claims.

If you believe that the state has slashed education spending, you may find it easy to trust in simple but costly solutions. If government must direct a significant amount of extra money to schools simply to bring them back to previous spending levels, you’ll be tempted to support tax increases. There’s some logic to that thinking, but it’s not true to the facts: Michigan schools receive more money per student than ever before.

The states that increased funding the most didn’t improve their test scores more than the states — like Michigan — that couldn’t keep up fiscally.

A recent study from Michigan State University says that our state’s education funding has fallen by nearly 30 percent. But it’s based on questionable methods, including an incomplete look at the historical record.

The report's attention-grabbing allegation compares the state's year of peak enrollment to the most recent year of federal data: 2003 to 2015. Michigan public schools lost more than 200,000 students during that time. Funds are supposed to serve students. It's more appropriate, then, to measure dollars on a per-pupil basis. When you do that, the 28 percent reduction mentioned in the study becomes 19 percent, or one-third less.

In a version of the old telephone game, at least one media report has misstated the study's larger number as a "per-pupil" decline. Similarly, during her first State of the State address, Gov. Gretchen Whitmer erred in declaring that Michigan's per-pupil funding was down 15 percent from 20 years earlier. Both statements missed the fact that our state has come to educate fewer students over time.

Even so, two other key facts undermine the MSU study's sensational assertion. First, researchers overlooked the two latest years of financial data. Extending the comparison to 2017 lets us see how state funding of Michigan schools has rebounded and accelerated coming out of the deep, one-state recession.

Second, and most significant contributor to the headline-grabbing number, researchers adjusted dollar values with a government price deflator, a methodological choice that is debatable at best. The deflator is tied to the average growth of state and local government spending around the nation. Since it is driven largely by the rising costs of employee health care benefits, the deflator expects schools to increase funding quickly to keep up. According to the deflator, each dollar spent by government in 2015 is worth 90 percent less than it was two decades earlier.

The Consumer Price Index is more commonly used to adjust dollar values over time. A regional version of the CPI calculates inflation based on a bigger basket of goods and services purchased by school employees and other taxpayers in the metro Detroit area. The changes it measures take into account the real effects of the recession on the people whose taxes fund the education system, as well as those on the payroll.

According to the regional CPI, Michigan's 2017 per-pupil funding was 17 percent greater than in 1995 and about 3.5 percent higher than the previous peak year of 2002. That kind of finding takes the gloom and doom out of the headlines, especially when higher funding coincides with our state's slide in academic achievement.

The MSU report closely ties Michigan's near-last progress on NAEP math and reading achievement to one of the lowest rates of funding growth from 2003 to 2015. But the states that increased funding the most didn’t improve their test scores more than the states — like Michigan — that couldn’t keep up fiscally. Six of the top 10 states for academic improvement were among the 11 states with the smallest funding growth.

Over those dozen years, Michigan's funding grew by 26 percent, unadjusted for inflation, and test scores fell slightly. Meanwhile, New York's revenues increased by a rate nearly three times greater, and its schools made the same dismal progress. A 2016 Mackinac Center analysis similarly found no relationship between additional spending and better results on 27 of 28 different measures of achievement.

The unpleasant truth is that continuing to add more money offers no hope of better educational outcomes. Far more necessary is a frank public conversation about how current resources are being used.