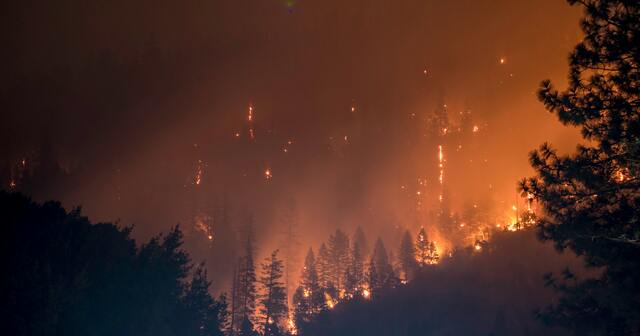 Good Neighbor Authority has proven to be a good choice

In a recent op-ed, published in The Hill, I pointed out that poorly managed federal lands are the source of many of the fires being widely reported in the media. Fires on public lands are often aggravated by a condition known as the “process predicament,” where land managers are handcuffed by onerous regulations and strident protests from special interest groups, leaving them unable to move forward on necessary land management. That inability to manage ensures that when fires strike, the flames have all the fuel they need to grow into dangerous and destructive conflagrations.

While the op-ed focused on California’s fires, many of the same challenges face Michigan’s public land managers. Clearly Michigan and California have different climates and, like so many Western states, California has a much higher percentage of federally owned and managed lands (45.9%) than Michigan (10.0%). But Michigan has made better choices, by going further and faster with the Good Neighbor Authority, a federal program that allows state foresters to carry out essential forest management activities on federal lands.

Conflict to Collaboration, a Mackinac Center report on how collaborative management techniques can be used to better manage Michigan’s federal lands, explains how the GNA program is growing in Michigan. After the state signed a 10-year agreement with the federal government in 2015, Michigan foresters have helped to manage several thousand acres of federal forests. Good Neighbor Authority projects are expected to cover as many as 6,000 acres of federal forests in Michigan in 2019. This is a small amount when compared to the total of 3.6 million acres of federal lands in Michigan. But the program is still in its early stages and is receiving support at both the state and federal levels.

In contrast, a 2018 report by the Rural Voices for Conservation Coalition argued that due to “strict state-level environmental regulations, more limited state capacity in forest resource management, and fewer timber-driven projects, California has struggled with how to effectively expand the use of GNA.”

Whether in the form of individual commenters to an op-ed, or influential environmental interests, the groups opposed to logging in California represent the challenges the state faces. When limited and reasonable fuel management options are suggested as a means of reducing fire risk, the hand-waving and opprobrium is immediate. The critics lash out at suggestions that the state allow selective logging to help address fire risk. They claim only the biggest and most valuable trees will be cut — a practice known as high-grading — or that managers will sell natural areas to logging and industrial interests.

But their professed concerns for the natural environment are belied by their apparent refusal to recognize some basic ecological realities. They attack essential forest management prescriptions, claiming that stopping climate change is the primary — or only — means of addressing the issue. Even if one conditionally accepts the theory that climate change is the reason for the massive fires, reducing the dangerous buildup of dead or dying trees, shrubs, and grass on public lands still remains the best method of reducing fire risk.

In fact, if climate change were making California’s droughts more extreme and encouraging increased insect attacks on its forests, active forest management would be even more important. That is because removing old, dead, and dying trees, as well as dense shrubs and grass before extreme heat and drought can dry them out, will make future fires less intense.

In other areas, like the land around Paradise, California, public lands are thick with grasses and shrubs, as opposed to forests. In those areas, the proper management mix is to send in crews with hand tools, or to allow grazing so livestock can consume the dense vegetation before it becomes a fire hazard. This is especially important in developments that are next to natural areas at risk for wildfire (known as the wildland-urban interface). In any area, however, carefully managed prescribed burns can also be used to help decrease fuel loading — the built-up flammable materials described above — and to reduce fire hazards.

The growing impacts of these massive fires have caught the attention of California’s elected officials. Even outgoing Gov. Jerry Brown — not well-known for actively supporting the forest industry — encouraged the California Legislature last August to remove the heavy restrictions on logging that have been demanded by environmental groups.

In the past, natural and human-managed fires burned through wooded areas frequently. Regular, limited fires reduced fuel loads and kept many of the big, hot fires from occurring. Today, strict regulations that require natural areas to be managed in a roadless and imaginary wilderness-like state, compounded by the Forest Service’s traditional policy of immediately suppressing all forest fires, have put us in the current precarious state.

Together, these well-intentioned but simply outdated management options have ensured that trees on many public lands have become decadent and overgrown, and more susceptible to disease and fire. We should return to a more active style of managing forests by opening them up and rejuvenating them with proper harvesting techniques, or with thinning and spacing trees in densely packed, overly mature stands.