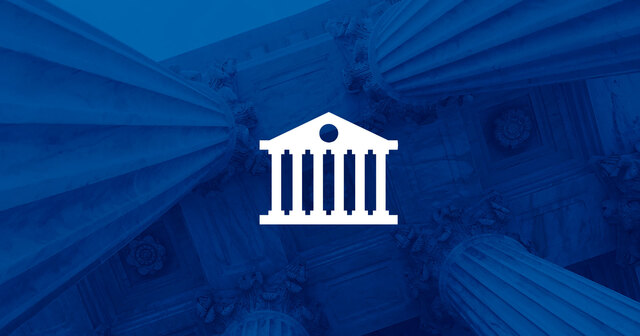 Michigan Grew Most When Business Subsidies Were Illegal

Unfortunately this 'Cooley Doctrine' has been suppressed

It used to be illegal in Michigan to use taxpayer money to benefit a private person or group. This was the "Cooley Doctrine," established by one of Michigan's most revered Supreme Court justices, Thomas Cooley. It guided state and local policy from 1870 until it was brushed aside and ignored, starting in 1941. A recent Mackinac Center study explains this legal history in detail.

A majority of justices on the Michigan Supreme Court started a policy shift in 1941 when they expressed a fear that the state would not be able to compete with other states if it did not support its major industries with taxpayer money. Florida taxpayers were, at the time, supporting state orange growers. But Michigan didn’t need to bend on principles to compete with other states: It was a national leader in economic growth during the period when the Cooley doctrine was active.

Comparative economic statistics on state economies before 1929 are rare. But economist Alex Klein at Keynes College in the United Kingdom estimated state personal income for 1880, 1890, 1900, 1910 and 1920. The U.S. Bureau of Economic Analysis has additional data for the years after 1929. The data can be used to see how Michigan’s economy compared to other states. It doesn’t cover the entire 1870–1941 period that the Cooley Doctrine was in effect, but it covers 61 years of it. 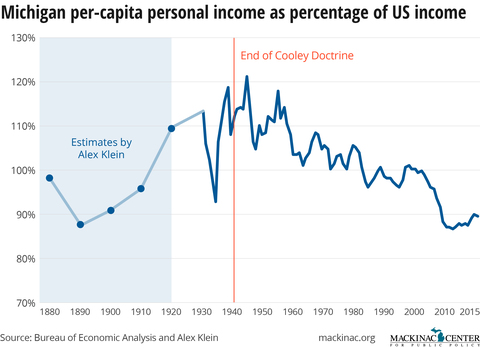 It wasn’t all upward, however. Michigan dropped from 21st to 29th during the recessions in the 1880s and stayed at that level until 1900. Then there were two decades of rapid growth, and Michigan increased to 15th by 1920. It continued to do well, and at the start of the Great Depression in 1929, it was even ranked 10th in the country. The depression hit Michigan hard and knocked it down to 19th, but the state recovered quicker than other states and hovered between 12th and 10th for the rest of the period before the court’s change in policy.

The most important piece of Michigan’s economic story happened during the Cooley period, which coincided with the founding and expansion of the domestic automobile industry here in Michigan. This industry took root and took off without lawmakers incentivizing it to grow; it expanded without the aid of taxpayer support

Michigan lost its lead over other states after the judiciary changed its mind on forbidding state support for private interests. It stopped outperforming other states and fell from having the 12th-highest per-capita personal income to the 14th in 1960, 15th in 1970, 18th in 1980 and 20th in 1990. Michigan has been below the national average since 1998.

The state has recovered a little bit since the end of the most recent recession, climbing from 40th in 2009 to 31st in 2017.

The trends demonstrate that people can thrive without lawmakers spending the public purse for someone’s private benefit. And the trends show that giving politicians the power to do this doesn’t give the state a competitive advantage. A state does not need to give away special favors to succeed in the modern economy.

Lawmakers should revisit this issue. There are plenty of reasons to be skeptical that lawmakers can improve the state economy by transferring resources to the people they deem to be important. And Justice Cooley’s rationale remains as relevant today as when he made it in 1871:

“Every honest employment is honorable, it is beneficial to the public; it deserves encouragement. The more successful we can make it, the more does it generally subserve the public good. But it is not the business of the State to make discriminations in favor of one class against another, or in favor of one employment against another. The State can have no favorites. Its business is to protect the industry of all, and to give all the benefit of equal laws.”