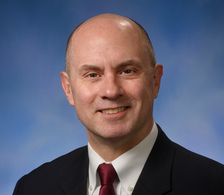 Michigan state Rep. Gary Glenn, R-Williams Township, has made himself a thorn in the side of the state’s regional electric utility monopolies. One reason is that Glenn supports letting Michiganders opt out of getting electricity from these utilities by choosing an alternative provider. He also has helped lead local campaigns against the industrial wind turbine farms that big utility companies profit from and are trying to expand.

Glenn now accuses electric utilities of bankrolling $300,000 worth of radio and TV campaign ads that attack him and praise his opponent in a Republican primary race for the 31st Senate District, which includes Bay City. According to the Michigan Campaign Finance Network, the ads are being purchased by two nonprofit political organizations.

Under Michigan law, such nonprofit groups must disclose details of their political spending, but they do not have to reveal the identity of their donors.

Glenn is threatening to introduce legislation that could start to erode donor confidentiality. Specifically, in a May 25 press release, he said:

Electrical utilities are the only corporations in Michigan who have the privilege of a government-guaranteed 90 percent of the market plus a government-guaranteed 10 percent profit each year. As long as monopoly utility bosses enjoy those government-granted privileges, ratepayers have a right to know how much of the money that utility bosses collect from our electricity bills is being used to try to buy elections and block legislation that would allow electricity customers more freedom of choice.

Glenn is correct when he says utility companies enjoy unique privileges conferred by government. For that reason, it might be appropriate for lawmakers to require more disclosure of their political spending if the firms choose to enter the political arena and become political actors.

But while Glenn has not specifically called for mandatory disclosure, advocates of the First Amendment may see his remarks as coming uncomfortably close to calling on the state to strip away donor privacy rights. In recent years, there have been frequent calls for taking away the right of Americans to donate to nonprofit political groups without having their names and addresses posted forever on a government database of who gave how much to which cause.

(A laundry list of such proposals was included in a concurrent resolution introduced in 2017 by three Michigan state Senate Democrats.)

A Michigan law enacted in 2017 on so-called Super PACs protects the right of donor confidentiality in such matters. Eroding that law would diminish liberty for reasons that were made clear in the landmark U.S. Supreme Court decision of 1957 known as State of Alabama v. NAACP. The court sided with those who argued that it was a bad idea to give Alabama officials the names and addresses of donors to the organization leading the momentous civil rights struggle then underway.

While most of today’s political conflicts may be smaller in scope, the principle of donor privacy still holds.

For example, after the mass shooting at a Colorado Planned Parenthood clinic in 2015, it would have been unfortunate if the names of the organization’s donors had been posted on the internet, along with how much they gave and the address of where their children slept at night. Similar issues have been raised with contributors to Black Lives Matter, and of course with many conservative groups too, including the traditional-marriage nonprofit group that Glenn himself headed for many years.