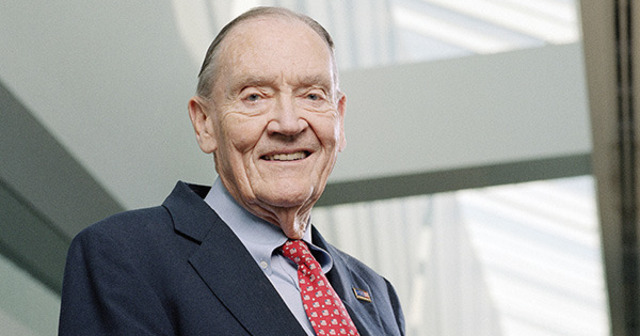 John Bogle, Hero to the Little Guy Investor, Passes Away

John Bogle, the founder and long-time leader of The Vanguard Group, passed away this week. His approach to financial investing was market-driven and saved people an untold amount of money.

Bogle entered the financial world right out of college, rose quickly and fell even faster when he was fired for what he called an “unwise merger.” This turned out for the good when he founded the Vanguard Company in 1974. He quickly developed the first index mutual fund available to the general public.

Investments are typically “actively managed” – meaning there is a person choosing which stocks or funds to buy and sell. But doing so costs time and money. Index funds are “passively managed” – money is invested in a specified fund of investments and simply tracks with those stocks. The most common index fund rises and falls with the S&P 500, which generally tracks with the whole market of stocks.

Index funds allow an investor to buy parts of more companies at a lower cost. Studies also show that passively managed funds perform better, especially when you consider the much higher fees charged by active managers. Wealthier companies and investors can use active managers to help influence the value of stocks. Lower-wealth investors can take advantage of the market while saving on costs.

That’s not to say that only small-time investors benefit from index funds. The financial community as a whole has been moving quickly in the direction of passive investing. And the state of Nevada has only one manager for its $35 billion worth of pension funds because every dime is in index funds. Cost savings can get passed down to help everyone. Bogle was very focused on that.

“My ideas are very simple,” he told the financial columnist Jeff Sommer of The New York Times in 2012. “In investing, you get what you don’t pay for. Costs matter. So intelligent investors will use low-cost index funds to build a diversified portfolio of stocks and bonds, and they will stay the course. And they won’t be foolish enough to think that they can consistently outsmart the market.”

When I was a teenager, I read the book “Common Sense Economics,” a basic guide to economic and investment principles. (One of the authors of the book was Tawni Ferrarini, a member of the Mackinac Center Board of Scholars and professor at Northern Michigan University.) This triggered my interest in investing and helped introduce me to Bogle. I read his most famous book, “Common Sense on Mutual Funds.” Initially released in 1999, near the height of a stock market boom, it offered the seemingly crazy idea of critiquing active investors. But by the time I read the updated version in 2009, in the doldrums of the Great Recession, it seemed miraculously prescient. I was sold – both on the value of index mutual funds and the importance of starting to invest at a young age.

Even as a poor college student, I opened my first mutual fund account and found a way to put aside a little money each month. The current and future financial picture for my family is much better off because of John Bogle. He was truly the hero for the “little guy” investor. Rest in peace.