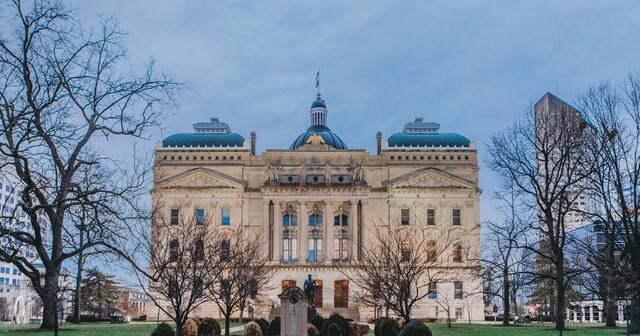 On April 1, the Indiana House Committee on Employment, Labor and Pensions heard testimony on legislation endorsed by Workers for Opportunity, Senate Bill 251. Vincent Vernuccio, a senior fellow at the Mackinac Center and representative of its Workers for Opportunity initiative, testified in favor of the bill.

“This is a First Amendment right,” said Vernuccio in his testimony. “This protects freedom of choice, and freedom of association for teachers and school employees across Indiana.”

The bill itself would allow Hoosier school employees to choose whether they wanted to pay money to a union, and it would require that unions obtain consent from their members, on an annual basis, before deducting dues. This would fall under the “affirmative consent” notion described by Justice Alito in the 2018 Supreme Court decision Janus v. AFSCME.

“In order to have dues deducted and given to a union,” Vernuccio said, “There has to be clear and compelling evidence of affirmative consent, and that’s what we’re talking about.”

Vernuccio also explained to the committee some of the troubles that union members face when opting out of their unions. While some unions allow their members to leave at any time, some have minimally publicized “opt-out windows,” or short periods of time in which a union member may leave. Other unions may still require a former member to pay agency fees even after opting out. Opt-out material is also scarce in the education sector, with most material directing teachers on how to opt in.

In addition to the Mackinac Center, several other groups provided testimony in support of the bill. These included Indiana Professional Educators, the Association of American Educators, the Indiana Chamber of Commerce, the Institute for Quality Education, Associated Builders and Contractors, and Americans for Prosperity. They all spoke of the positive impact it would have on Indiana.

Kyle Rosebrough, a teacher representing Indiana Professional Educators, echoed Vernuccio’s concern for teachers who are trying to leave their union but face roadblock after roadblock.

“I’ve been a kindergarten teacher for 14 years, and a schoolteacher for 44 years” she said in her testimony. “I cannot tell you when I last saw a union signing card that told me how much my dues would be.”

The bill, which has already been approved by the Indiana Senate, was voted “do pass” by the committee at the end of their session, by a vote of eight to three. Now the bill is eligible for a full vote in the Indiana House, where it is expected to pass. Since there were no amendments added by the House, the bill will not return to the Senate following the vote in the House. Instead, it will go directly to Gov. Eric Holcomb for his signature.