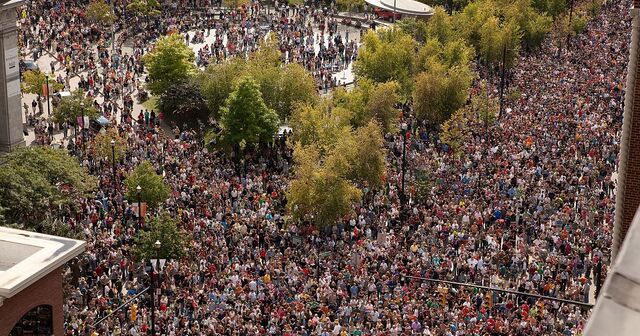 How a Private Arts Festival Thrives

ArtPrize is in its ninth year

People like art. That’s good — it’s something that should be treasured and shared widely. But politicians have often taken that to mean government should subsidize it.

That’s been the trend in recent decades. At the federal level, taxpayers spend $148 million through the National Endowment for the Arts and the National Endowment for the Humanities, both established in 1965. Federal arts spending has consistently gone up for decades, but based on the response to suggestions that it be cut slightly, you might conclude no art was produced in the United States before 1965.

The state of Michigan spends money on “arts” through a variety of programs and channels (including the Department of Environmental Quality). Most of the direct spending goes through the Michigan Council for Arts and Cultural Affairs, with a budget of more than $10 million that insiders can dish out.

Local governments also spend big. The Detroit Institute of Arts gets $23 million every year from people in Wayne, Oakland and Macomb counties through a special tax increase. That’s on top of the state, federal and other city funds it receives.

Government spending on arts is dubious. What counts as “art” is subjective and particularly so when the government is in charge. For example, backers of Michigan’s failed film subsidy program claimed that sending hundreds of millions of dollars to billionaire Hollywood film studios was “supporting the arts.” And patrons of museums and festivals are, on average, far wealthier than most Americans, meaning the subsidies benefit the well-off at the expense of the poor. Finally, art subsidies are also unnecessary — the private sector has and will continue to fund art no matter what government chooses to subsidize.

With this in mind, it’s nice to see ArtPrize — a nonprofit, privately funded festival — doing so well. The Grand Rapids event is kicking off its ninth year. The radio program “Our American Stories” recently took a deep dive into what makes ArtPrize so successful.

More than 500,000 visitors will experience art from 1,400 participants over the next 19 days. That makes it the largest arts festival in the world. That’s about the number of visitors the Detroit Institute of Arts typically gets in an entire year.

The bottom-up nature of ArtPrize makes it unique. Anyone can enter for cash prizes and people vote, along with a panel of judges, on the winner.

From all accounts, ArtPrize is a fantastic event, and the fact that it doesn’t require annual appropriations from the Legislature makes it even better. Swing by Grand Rapids from Sept. 20 to Oct. 8 and enjoy the festivities.