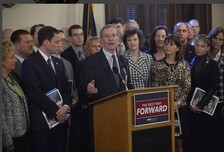 The Michigan House Republicans have released their action plan, which contains their goals for the legislative body for the next two years. Overall, it is very good, as most of the recommendations would lessen the scope and power of state government.

Below are some highlights from the plan, each followed by a commentary.

The Michigan Public School Employee Retirement System’s debt has grown so immense that it is hurting our kids. The system is only 61-percent funded and has more than $25 billion in long-term debt. Currently, 36 percent of education dollars for payroll go to cover pension liabilities. As that gigantic liability continues to grow, more and more resources are redirected out of the classroom, hurting all Michigan students. … [E]nding unsustainable public employee legacy costs … ha[s] eluded lawmakers for far too long.

Michigan closed its state employee pension system to new workers in 1997 but did not make a similar change to its school pension system. That system costs the state $4 billion each year and its liabilities have skyrocketed. Over one-third of school payrolls go to this system, the vast majority of which pays on its debt — which still keeps increasing. This is an existential crisis to teachers and taxpayers, and the only way to solve it is to shift new, incoming workers to a defined contribution plan. Learn more here.

A simple and fair tax code is key to signaling that Michigan is a welcoming place for workers and job providers alike. Therefore, further action is necessary to lower the state’s tax burden and improve the lives of every worker in Michigan, especially those living paycheck to paycheck. We will consider proposals to improve the current tax system by focusing on the areas of reducing personal income taxes and examining and simplifying the tax code.

In 2007, Michigan hiked its income tax by 12 percent with the promise that the increase would be repealed by 2015. But that so-called temporary hike has still not rolled back, despite the state’s budget increasing by $6 billion — up to an all-time high. That tax increase has cost Michiganders a total of $6.3 billion, or more than $1,000 per typical household. Learn more here.

To provide people with more opportunities, we will support a broad-based economic environment that is friendly to job creation and business growth, no matter the size of the business. We are also going to protect the taxpayers’ investment by making sure the funds used by the Michigan Economic Development Corporation are transparent to the public, directed toward long-term viability, help small businesses and are not wasted on picking winners and losers.

Michigan has vast corporate welfare programs that take roughly a billion dollars out of the general fund this year. The House should hold the line on new proposals, cut back on what we are paying, and require transparency for what’s already on the books. Learn more here and here.

Michigan requires licenses — special government permission — for at least 160 occupations. This costs jobs, income and population. The Legislature should set up a process to review those not shown to protect health and safety. Learn more here.

Parents should have every opportunity to send their child to a school that best fits their child’s needs. This must include many options, such as charter public schools, traditional public schools, private schools, online schools, and home schools. There is no better measure of a child’s potential for success in school than a parent actively engaged in his or her child’s education. We will support proposals to fund students instead of institutions, and give parents more control over their child’s education. Opportunities such as vouchers or education savings accounts to empower students and parents should remain at the center of our discussion.

The research on parental choice shows that it works. More importantly, the freedom to choose a child’s school is fundamental. Good for the House Republicans keeping this front and center. Learn more here.

Law enforcement officials have and should continue to have the ability to seize property while they investigate criminal activity. But the problem with Michigan’s laws is that they allow law enforcement to take ownership of property without a criminal conviction. The Legislature should eliminate civil forfeiture and replace it with criminal forfeiture — where the government can only take ownership of property through forfeiture after it has convicted a person of a crime. Learn more here.

Our no-fault system must be reassessed with an eye toward reducing costs. People deserve a more efficient and fair auto insurance system, and we will work to protect drivers while making auto insurance rates more affordable.

Michigan is a national anomaly in mandating a no-fault auto insurance system along with unlimited coverage known as “personal injury protection.” Our drivers pay among the highest costs in the nation, and twice the national average. Learn more here.

This is the third action plan released by the House GOP and in the past, the results have been mixed. The key for the House is overcoming expected opposition to free-market issues from the Republican-dominated Senate or Gov. Rick Snyder. At the same time, the House GOP should welcome good policy ideas coming from the other parts of government.

The document isn’t all-encompassing. It’s missing some key issues, like prevailing wage, as well as union release time and recertification (learn about those and other issues here). But overall, it is a solid document with issues the House should pursue.

It's Time to Eliminate Bureaucratic Barriers to Health Care Access